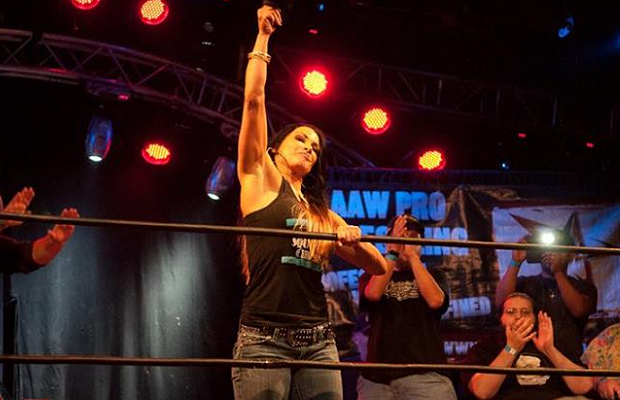 Over the weekend at AAW’s “Scars and Stripes” in Merrionette Park, IL, former WWE Diva and TNA Knockout Tara – real name Lisa Marie Varon – made her first wrestling appearance since her TNA release.

There to watch the show as well as promote her Chicago restaurant, The Squared Circle, Tara was rudely interrupted by wrestler Markus Crane. Tara showed why she is still not the lady to mess with by giving him a powerbomb!

Tara has become a staunch supporter of the independent scene in recent months, checking out many local shows (including SHIMMER in April) and broadcasting both mainstream and lesser-known promotions at her restaurant. Could more independent dates be in her future?

Also on the show were Miss Natural and Heidi Lovelace, who competed in a mixed tag team match.

Lovelace teamed up with CJ Esparza, while Natural partnered with Jordan McIntyre. Lovelace pinned McIntyre to pick up the victory for her team.

Do you want to see Tara compete in the indies?