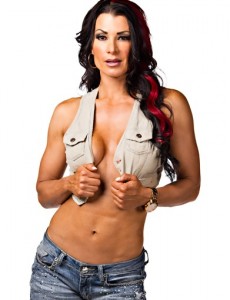 The biggest mystery since… well, Kaitlyn‘s attacker, is that of TNA star Tara and her Hollywood boyfriend.

We grilled the former Knockouts Champion about her lover in our exclusive interview ahead of tonight’s Bound for Glory pay per view, and while she wouldn’t let slip his identity (sorry, we tried!), we did get some scoop out of her.

“It’s going to be a big surprise,” says Tara. “He’s a big deal, I’ll be honest. You’ll be familiar who he is. I’m excited. I’m biting my tongue not to say anything. He’s super dreamy. I can’t wait for you guys to see him.”

Who could it be and just when will we meet him?

Tara teased that her boyfriend will be at Bound for Glory via her Twitter page. She wrote Friday: “I can’t wait to see you boo at Bound For Glory”. But will he on camera?

Considering the emphasis on him being from Hollywood, and a “big deal”, as well as the fact he’s “familiar”, could it be that TNA has tapped a known television or film star for the role? Actors are always looking for their next role, right? Hey, isn’t Mr Belding a wrestling fan? Sure he doesn’t tick the ‘dreamy’ box, but in Tara’s own words, she does have a goofy sense of humor. Or perhaps it will be a familiar name in wrestling, such as John Morrison?

Who do you think it is? Tell us your theoriesin the comments!