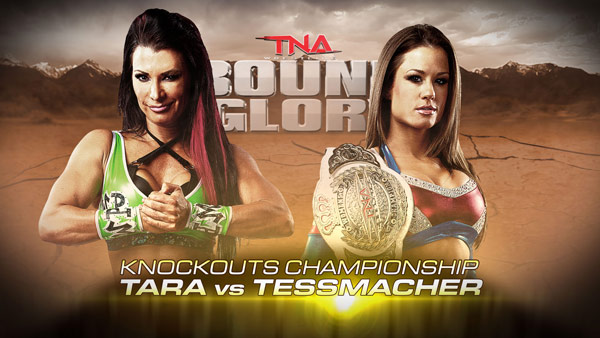 The Knockouts Title is on the line tonight as Tara challenges former best friend, Brooke Tessmacher, for the belt at Bound for Glory. Who will win? The Diva Dirt team weigh in:

Bobby: I honestly don’t know what I want to see happen here. This feud has been built up, and it’s TNA’s biggest pay per view of the year so it seems fitting for a title change like when Mickie beat Trish at WrestleMania 22… but Tessmacher hasn’t really held the title that long yet so I don’t know if I want her reign to end. Nonetheless, I’m excited for their match and the feud has been built up nicely over the past month that I feel more invested in it than I have in a while. For some reason, I see Tara sneaking out with the victory. Perhaps her Hollywood boyfriend plays a factor in it?

Cryssi: Not entirely sure if I’m even qualified to make a prediction on this match seeing as how I don’t know the storylines or anything like that. I reckon I’ll just keep picking Brooke Tessmacher. She keeps on keeping butt and I like her.

Erin: Brooke has the momentum going into the match, and usually that would make me leans towards picking Tara to win, but I’m not sure there’s been enough going on in this feud to indicate a title switch. TNA seems comfortable with Brooke as Knockouts Champion, and even had her cleanly defeat one of the top Knockouts in the division (Gail), so I think she’s going to hold on to the title longer and further that progression. Brooke Tessmacher wins.

Melanie: It seems like this is Tara’s night. The build up she’s had lately, the tease of the Hollywood boyfriend etc., I really could see her winning her fifth Knockouts Championship here. TNA has done a great job building this feud and revitalizing Tara’s character and career. At 41 years old, Tara is still one of the best women out there and it would be great to see her win tonight and prove that she’s still got it. Tara wins.