Tara Talks Differences Between Working in WWE & TNA, Comments on Lack of Use on TV Lately 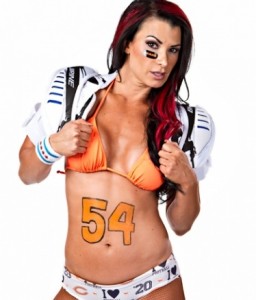 Knockouts Tag Team Champion Tara appeared on the In Your Head online radio show last night talking about her upcoming independent appearance for a good cause. Tara will be appearing for Remix Pro Wrestling on October 8th, facing Sojo Bolt, in an event that will raise money for the Humane Society of Ohio.

On the show, Tara revealed that she’s been frustrated recently over her lack of TV time along with tag team partner, Brooke Tessmacher.

Recently, Brooke Tessmacher and I, we haven’t been… I’m not at TV. We were supposed to have TV [tapings] today in Tennessee and we weren’t brought in for two TVs. I’m hearing on Twitter a lot of people are like, ‘Wow, you haven’t been used a lot’ and I’ll be honest, it’s frustrating, but I’ve been making my voice known to people I work with, my bosses and everything like that, so hopefully the squeaky wheel gets oiled.

We don’t get punished for speaking up over here which is really nice. I wanna be used. The belts [the Knockouts Tag Team Championships] are not jewellery for me. It’s a championship and I want to defend it. I’m not just here to look pretty with this around my waist, so I’m hoping they use a little bit more after Bound for Glory.

Speaking on whether looks or wrestling skills are more important for female wrestlers, she says:

It is entertainment. I like to stress that. I think it’s a package deal. Fit Finlay in the past said that the best wrestlers don’t get TV time. My experience from my past, for my skills and how hard I worked at my wrestling skills, [I] wasn’t as appreciated as girls that looked like a model and it’s very frustrating.

People wanna see some good looking women on TV and who am I to say, ‘No, you wanna watch wrestling, you wanna watch wrestling’, you know what I mean? I think TNA/Impact Wrestling does showcase different realms of the women. When I first joined — Awesome Kong, ODB, Sojo, Traci Brooks, the Beautiful People — it was just like a mix of people and it was so refreshing to see not the cookie-cutter long hair, blonde hair, blue eyes girl next door. It was really refreshing to come to a division that had so much to offer. It made me feel good.

It’s nice that the women’s division on Impact [Wrestling] has a little more free range on what we do in the ring. It’s not like, ‘Hey, you have five minutes. Only do five minutes’. They’re like, ‘Well, how much time do you want?’ […] When I first came there, I was like ‘How much time do I have in the ring on TV?’ and they were like, ‘You just do what you want to do’. I was kind of lost because I was like, ‘I need rules’. I was so used to having rules and structure. It was so refreshing. I was like ‘Am I allowed to do this?’. I was still walking on eggshells from the past [in WWE]. When I came into TNA, I was like ‘Oh my gosh, this division’s completely looked at differently’.

Finally on her match with Sojo at Remix Pro Wrestling on October 8th, which will be a very rare independent appearance for Tara, she says:

We have a lot of history. She was the first friend I made when I went over to TNA/Impact Wrestling. She was the sweetest thing but you get her in the ring and things change tunes really quick.

We only had one match together and I was so bummed because I was looking forward to having some future matches together or as a tag team or something like that. Next thing I knew she was gone. I was so sad. I was left alone on the road.

I’m super excited to face her on October 8th.

Listen to the full interview at this link.

Thoughts: Interesting to hear Tara speaking out on not being used as much lately. I would hope there’s no backlash for it, as she says. I agree that the Knockouts Tag Team Championships need to be more than just props and TNA does need to build a better tag division around the belts. Tara & Tessmacher have been solid champions thus far, and it’d be nice to see them in a real storyline/feud.