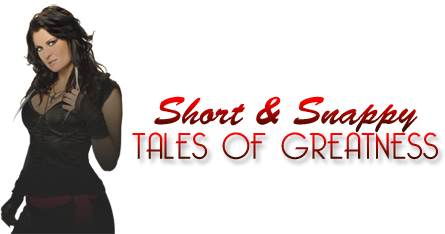 Diva Dirt is honored to welcome former WWE Diva, Katie Lea aka Kat Waters to the team as she brings her column ‘Short & Snappy Tales of Greatness’ to our readers. Welcome, Kat!

So a few weeks ago (OMG, times goes fast when you‘re fabulous!), as many as you clever, clever people who follow me on Twitter know (it’s @dawgkilla for all you poor backwards people who don’t), I was watching the very interesting movie ‘Rollerball’. Now I am not about to turn this into a full-blown movie review- as, first of all, the movie is not new and has probably been reviewed to death, but second of all- I really couldn’t figure out what it was all about.

What I did want to mention, however, was the fascinating discovery that this film about a crazy roller derby/basketball mix featured not only Paul Heyman (in a prominent role), but also Shane McMahon (in a smaller part) and an extra that looked just like Justin Roberts… Imagine my surprise! And here I was, thinking I had invented the roller derby-wrestling connection courtesy of my very excellent, downright amazing rollerderbyist sister, @nuke_leah (again, Twitter-speak… follow her everybody!).

So, turns out, roller derby is nothing new. Be that as it may, it is of late experiencing somewhat of a new wave, a renaissance quasi- in fact, it has been referred to as the up-and-coming sport, the one to watch, the bandwagon to jump on. Which means of course that I, the notorious dawgkilla, am hereby pressing my finger firmly down on that pulse. And in timely manner, by a stroke of luck I finally got to watch my sis live and in colour, skating rollers and kicking ass… And thus figured out what makes this sport so special.

Number one: the culture of the roller derby. As experienced and interpreted by me…
As everyone knows, this is a sport played by women. Well, mainly. There are some male leagues, but this must be the only sport (to my knowledge, and it is generally accepted that I know just about everything) where the female version is vastly more popular and prominent in the mainstream flow of consciousness… Ask anyone on the street.

And so, with this being predominantly female territory, you may expect some kind of militant feminism. Some kind of ’us versus them’ mentality, perhaps a ‘we’re better than you and sure as hell don’t need you’re sorry ass’ type bitterness… In vain! Men are more than welcome and integrated, taking part as referees and announcers. (In fact, unexpected happiness was granted when I spotted one or two real contenders for possible ‘Army of Boys’ recruitment…) The atmosphere is inclusive, the focus is on competition. On respect, support, hospitality (the teams bring each other gifts!) and fun, fun, fun! Are the roller girls athletes? Bad asses? Hell yeah. But not aggressive, just quietly empowered, using the colour pink, traditionally a symbol for giddy girlie-ness and turning it on it’s head. No longer for girls who only want to talk about hair curlers, shopping, bubblegum and how nice they want to look for their man, but as a symbol for strong, independent women, who happen to know their own worth and revel in being the best at what they do…

Number two: undoubtedly the sport itself.
Now to the untrained mind, watching girls in short skirts, ripped tights and colorful outfits skating around a track, shoving each other from side to side could appear to be a novelty item and get boring after a few rounds. To be honest, I was suspicious that this may be the case. Well, I was wrong (and I am never wrong)! Forgive me, my mind was untrained! But once you understand the rules and can keep track (nice pun… eh? eh? Back to my old tricks!) of the tactical plays it is downright riveting. I, myself, ended up almost falling off the edge of my seat on more than one occasion and was indeed in danger of losing my smooth, silky voice by the end of the night.

So guys, if you wanna take my advice, and you’d better… check out your local roller derby team. Take part in this extravaganza, enjoy the spectacle, the speed, the hot chicks on skates and the cupcakes! Ah, the cupcakes… :P

And then tell me you’re not a believer.

This message was brought to you by Katarina Waters aka the artist formerly known as Katie Lea. Watch this space!