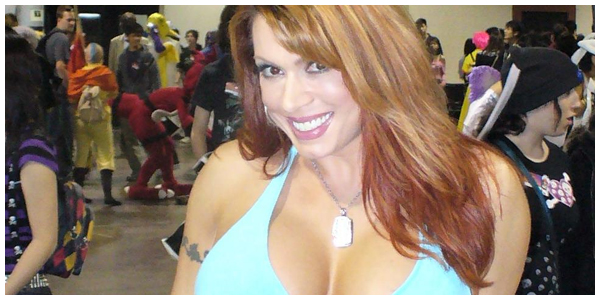 Independent wrestler, April Hunter has said that she turned down the opportunity to become a TNA Knockout and says she is ‘continually disappointed’ in the way that TNA has treated its Knockouts division. She writes:

While I’m in a chipper carb depleted mood, I thought I’d mention something. I’ve been holding my tongue for far too long. Last month, I turned TNA down. They wanted me to come in as a wrestler and right now, I can only be a manager. I’m banged up and I feel I’ve gone down there too many times already. For nothing to happen yet again but another hope spot and bs-ing? I’m just not up for it. And my heart hasn’t been in wrestling for a while, anyway. Ironically, the day after I said no, they asked Roxxi back. After seeing the treatment they gave her, I can’t help but wonder if that would have been me. The fact that I would even have to ask myself that question…I feel I made the right decision.

I think TNA is missing the boat on women’s wrestling and cruiserweights. This is the niche that founded them…what WWE has consistently left out. This is where they could make themselves stand out. I also think they’re missing the boat on Roxxi. She’s got a unique look and persona – it’s what endears her to fans. She’s not cookie cutter. She’s also one of the best (and safest) females I’ve ever been in a ring with. But most of all, she’s got a stellar work ethic. In a business where so many are content to get by with doing as little as possible, she’ll always give ‘er. I can’t say this about many I’ve crossed paths with in my eleven years in wrestling. I’m coming from a heritage of hard working immigrants, where work ethic means something and entitlement simply doesn’t exist. You earn what you get, and she has.

I am continually disappointed in TNA. They have all the tools, yet can’t figure out how to use them. Dropping the ball is the only thing they excel with.

As a fan, it’s frustrating. As a worker, it’s heartbreaking.

I reckon if Dixie Carter spent half as much time promoting as she does twittering, they might actually have some ratings.

Then again, I could be wrong.

I think it’s incredibly telling that not only are girls leaving TNA but now girls don’t want to go to TNA. Sure, there’ll be five girls who’d jump at the opportunity that April said no to but in my opinion, she is the smart one. With the way things have been going in the division of late, I think most female wrestlers would be better off out of it. I’m looking at you, Mickie James.