The Bash: Through the Years 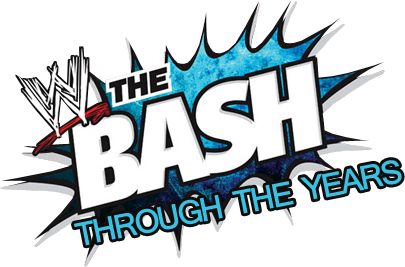 Tonight, WWE holds the 6th incarnation of it’s ‘Bash’ pay per view, a former staple of the WCW PPV calendar. Up until this year, the event had gone by the name of ‘The Great American Bash’, but in an effort to make the show more globally-friendly, it has been shortened to ‘The Bash’.

Tonight at The Bash, the Women’s Championship will be defended for only the second time at the event when Melina defends against Michelle McCool. Neither Diva is a stranger to this particular event, Melina was involved in the very first Women’s Title defence in 2007. Meanwhile, McCool’s career landmark came last year, when she became the first ever Divas Champion at this PPV.

Let us take a look through the years at the various Bash events, ahead of tonight’s big pay per view! Remember to join us for our Bash live blog from 7.45pm ET/12.45am UK!

The first Bash pay per view was held in 2004, when WWE ressurected the event for it’s SmackDown brand. With the advertising campaign based around the brand’s top Diva, Torrie Wilson, it only made sense to put her on the card. Sable and Torrie had started out as bitter rivals in 2003 before making up to appear on the cover of Playboy together in March 2004. They even notched up a huge victory together at WrestleMania XX for the SmackDown brand. But just a few months later, they were back at each other’s throats (both on screen and in real life!) which led to this match at the Bash:

It may not have been the most technical affair, but Sable could teach our current crop of Divas a thing or two about in-ring psychology. Her heel mannerisms are resemblant of current Diva, Maryse‘s. Though Sable stole a win here, Torrie would get her revenge the very next week on SmackDown.

In 2005, a new Diva emerged on the SmackDown scene and promised to usurp the ‘top Diva’ position from Torrie Wilson — enter Melina. With Torrie, once again featured in the promotional campaign for the 2005 Bash, you couldn’t just leave her off the PPV. So it would be Torrie vs Melina in a Bra & Panties Match to settle their differences with Candice Michelle serving as special guest referee:

The battle for SmackDown supremacy was cut short later that summer, when Torrie and Candice were traded to Raw. Melina would follow suit in 2006, where she would win 3 Women’s Championships and her short feud with Candice would become full blown just a couple of years later…

2006
Ashley vs Jillian vs Kristal vs Michelle McCool

The following year saw a blip on the Bash radar, as four of the brand’s Divas competed in a four-way Bra & Panties Match. A match that made me yearn for the days of Torrie, Sable and Melina.

In 2007, The Bash was given a lifeline: it had become a tri-branded pay per view. Which meant that the Raw Divas got a turn to appear on the show, a far cry from the year before. This year saw the Women’s Championship on the line for the very first time at the Bash; Candice defended against Melina. These two had a prior altercation at the 2005 Bash, but it was on Raw where the dial turned up on their feud in 2007. Just a month before, Candice had done what we thought was impossible — beat Melina for the title and Melina would get her rematch at the Bash:

Though Candice bested Melina here, a few months later she would drop the title to Beth Phoenix and suffer the first of her many injuries that would end her career as she was released earlier this month. Meanwhile, Melina would come back from her own injury to win her third Women’s Championship from Beth, a title reign that is threatened at this year’s Bash!

2008 made history as the Divas Championship was introduced and at The Bash, the first ever champion would be crowned. The SmackDown Divas had won back their hold on the event, when Michelle and Natalya would compete to become the first ever Divas Champ:

Fresh in our minds, last year’s event was a disappointing one considering the hype surrounding a new title for our Divas. However Michelle McCool proved that she was Diva-enough to be a champion and that is a mentality she will hold onto tonight, when she has the opportunity to make history again! Can she be the first ever Diva to hold the Divas and Women’s Championships? (Read our 2008 Bash live blog)

Which Bash has been your favourite? Vote below: