The Other Divas Brawl at the Bash 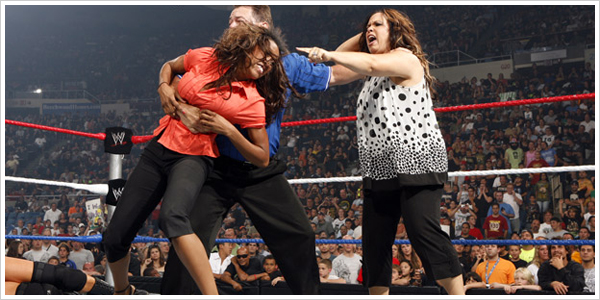 Diva Dirt reader, Artie rightfully reminded us that we’ve been focussing so much on Michelle McCool‘s Divas Championship victory over Natalya, that we’ve forgotten to even acknowledge the other Divas brawl at the Bash. Well more of a catfight than a brawl but highly entertaining nonetheless, Vickie Guerrero laid her former wedding planner, Alicia Fox the frig out with a clothesline at the Bash last night! I was really surprised to see Alicia get involved in the match, because I thought they’d forget all about her but talk about a way to enter the WWE, right? Alicia tried to help Edge win the WWE Championship before being attacked by Vickie, the two continued their brawl in the ring and just as it seemed Edge was going to spear Alicia she moved out of the way and he got his “wife” instead!

This was really well done, I thought they would have Alicia be Lita 2.0, but obviously that didn’t happen because why on earth would Edge want to spear her? Vickie could get a big pop when she came out and clotheslined Alicia, which truly is a turnaround from the deafening boos! This week’s SmackDown just got a lot more interesting, I can’t wait to see more of Alicia and to a lesser extent, Vickie!