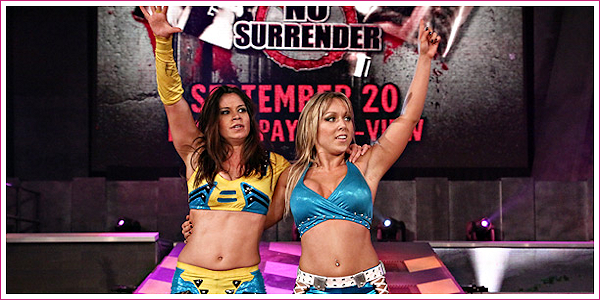 This week on Impact treats us to even more tag team competition and something a little extra.  First in Knockout action is match numero tres of the 1st round: Taylor Wilde and Sarita vs. Alissa Flash and Daffney.  Have I mentioned just how much I loathe Taylor and Sarita’s ring entrance?

Taylor Wilde & Alissa Flash begin the match with a test of strength.  Taylor manages to outwrestle Alissa into an armbar, but Alissa slams her down.  With a kip up, Taylor laces fingers with Alissa and tags out to Sarita.  Taylor nails an arm drag with an assistance of the turnbuckles, and Sarita follow up with a flying arm drag.  Those two invent and impose multiple inventive tandem offense that I won’t even attempt to call.  A series of arial manuevers and arm drags later, Sarita attemps a dropkick, but Alissa braces herself against the ropes and charges back with a clothesline.

Daffney gets her chance to in on the action with a big uppercut to Sarita.  However, Sarita counters that with yet another arm drag and a flip over.  What is that, arm drag #304?  Daffney kicks out at two, and Taylor Wilde gets tagged in.  She attempts a sunset flip from the second rope, but Daffney rolls out before a count can be made.  Sarita channels some poetry in motion.  However, her not being the legal woman all encourages Slick Johnson to shoo her ass right out of the ring.  Meanwhile, Daffney whips Sarita into the opposing corner where she suffers a cheap shot courtesy of Alissa.  Alissa gets tagged in and goes back on the offense with a powerful scoop slam and a stomp to the face.

The “Lovely and Very Pasty” Daffney gets tag in again.  This time, she takes Taylor down with a Shining Wizard now aptly referred to as “Daff-Knees” and then follows up with an abdominal stretch.  Taylor wastes no time maneuvering out of the move with a knee to Daffney’s face.  Both women make the hot tag to their respective partners.  Sarita goes for a crossbody on both Alissa and Daffney, is abruptly stopped, but overcomes with a tornado DDT to Daffney.  With an assist from Sarita, Taylor delivers some more impressive offense to the Future Legend.  Sarita capitalizes with a splash, but Alissa gets the shoulder up 2 while Taylor and Daffney take the fight to the outside.  Sarita drops Alissa with a belly-to-belly suplex for the win?  WHAT?  All of that aerial work and only a standard finish to show for it?  Oh well.  Taylor Wilde and Sarita advance.

Sarita and Taylor Wilde seemingly do everything that they can to reiterate the “tag team aspect” in this tournament.  An overall good match, I find the constant aerial offense a bit gratuitous.  While awesome, it does little to add to the storytelling element.  Otherwise, “Taylor/Sarita” is the most believable team next to the Beautiful People.

Next up contends the Beautiful People (Angelina Love and Velvet Sky) against Madison Rayne and her “Mystery Partner.”

Madison Rayne makes her way to the ring, sending off major Torrie Wilson vibes.  Roxxi is revealed as Madison’s “secret partner.”  Madison opts to start the match, but Roxxi tags herself in instead.  She ducks a clothesline and takes a couple shots at Angelina.  Roxxi takes Angelina down with a Fireman’s carry followed by a senton, all to Tazz’s…approval?  “Roxxi is a big chick.  She’s got some size.”  Um…is that supposed to be a compliment?  Tazz goes on to knock Roxxi’s “butcher-boy haircut.”  Either Tazz is really playing up the color commentator gimmick or someone somewhere has a personal endeavor. The Roxxi “insults” seem somewhat unwarranted.

Roxxi goes for a pinfall, but Angelina gets the shoulder up at 2.  Roxxi whips Angelina, but Angelina fires back by slamming her to the mat.  Pulling up by the hair, Angelina tags Velvet in.  Velvet screeches “Holler!” into a tandem elbow and a pin attempt.  Roxxi kicks out and endures a boot to the throat.  Velvet goes for the pin, but Roxxi kicks out again.  Roxxi knocks Velvet down and quickly tags in her partner.  Velvet does some more screeching and falls to a double back elbow.  Velvet kicks out at 2.  A couple shots at Velvet and Madison is sent to the Beautiful People’s corner where Angelina gets the best of her.  The referee is distracted long enough to allow a 2-on-1 attack as the Beautiful People forge a tag.  The time and effort it took them to “fake” a tag, couldn’t have they made the damn tag?  Heel-Tactics-R-Us.

Angelina takes the fight to poor Madison with multiple kicks and a corner foot choke.  Velvet is tagged in and attempts to go “back to basics” with a couple inspired snapmares.  Madison kicks out (how could she not?).  Velvet rushes Madison into the corner, but Madison powers out.  In an impressive show of agility, Madison stops, drops, and roll into making the hot tag to Roxxi.  Roxxi does some double duty for awhile; she drops Velvet with a fallaway slam and delivers a devasting Voodoo Drop to Angelina Love.  Angelina gets the shoulder just in the nick of time in a somewhat surprising nearfall.  Roxxi can’t believe it either.

Madison gets the tag, and the two attempt another double team manuever.  However, Velvet Sky grabs Roxxi by the ankle and drags her out of the action.  Meanwhile, Angelina gets the win by a roll-up and a handful of tights.  The Beautiful People advance.

Not much of a one-off “welcome back” for Roxxi, seeing as her team did lose the match.  It didn’t do much for Madison’s intention to exact revenge on the Beautiful People.  I’m intrigued to see just how TNA manages to spin this to accommodate Angelina Love’s situation.  Never underestimate TNA’s ability to write something off and forget it ever happened.

Making his first appearance on Impact in what seems like ever, Cody Deaner vies for some competition.  Mick Foley obliges him in the form of a MMA-style match against Tara.  Tara, looking quite fetching and rather intimidating in her MMA gear takes the fight to the Deaner.  Before Deaner can be too emasculated, an agitated Awesome Kong puts an end to the “fun” with an Implant Buster to Tara.  Deaner wins.  The end.

So…Deaner gets a spot on the broadcast while the Knockouts Champion gets shafted to a webmatch?  Okay, I’ll take it…I guess.

Bonus webmatch review: The Knockouts Champion ODB takes on the newest go-to heel jobber (besides Sojo anyway) Alissa Flash. The match begins with a lock-up. Alissa gets a few shots in on the champion, but that offense is retaliated once the fight progresses into the corner. ODB forces Alissa’s head into the turnbuckle and subjects her to a face full of…enhancements and…crotch. Not often do we see Alissa get “woman-handled” in this fashion. However, Alissa begins to get the upperhand. Alissa continues to dominate the majority of the match, but ODB conquers. A fallaway slam (followed by a signature kip-up) renders a near fall, but gets the win with a running powerslam.