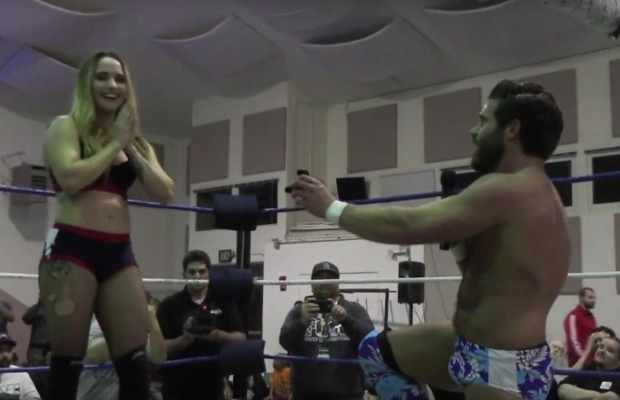 * Athena is reportedly dealing with an injury to her left arm, as she was seen wearing a cast during a meet and greet at a NXT live event last night in Orlando. (Wrestling Inc)

* Charlotte recently spoke to WKYC about carrying on her family’s legacy and not wanting to be a Diva growing up. (WKYC)

* Natalya will be featured on the upcoming season of E!’s Hollywood Medium, which premieres March 6th. (YouTube)

* Paige is featured in a new Snickers ad promoting the brand’s partnership with the WWE for WrestleMania 32. (YouTube)

* A new Lita-centric trailer for the documentary Nine Legends has been released, showing Lita talking about the impact she had in drawing women and girls into watching the WWE. (YouTube)

* Charlotte and Sasha Banks will play dodgeball in an upcoming episode of WWE Game Night. (Instagram)

* A new clip from the NXT’s Greatest Matches, Vol. 1 DVD has been released, showcasing the NXT Divas division. (YouTube)

* Charlotte recently spoke to The Tennessean about the difficulty of getting over as a woman in the WWE. (The Tennessean)

* Lana is teasing the debut of a new web series starring her and her friend Rene Lovit titled Sisters. (YouTube)

* Trish Stratus’s movie Gridlocked has been acquired for North American distribution. No release date has been announced yet. (Wrestling Inc)

* According to TMZ, former NXT Diva Zahra Schreiber has split up with Seth Rollins. (TMZ)

* Former Tough Enough competitor Chelsea Green broke her collarbone while wrestling for The Great Khali’s promotion in India this week. She has undergone surgery to repair the break and promises to be back in the ring soon. (Instagram)