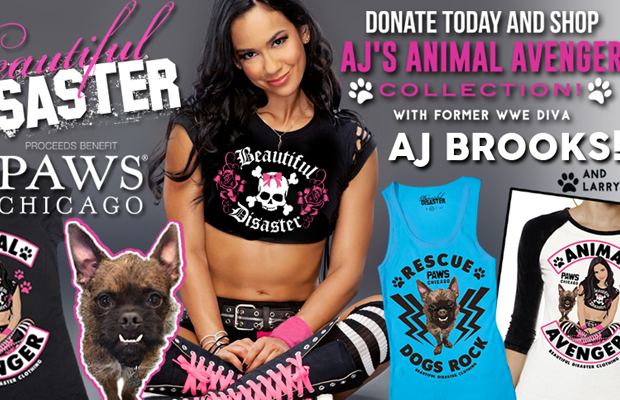 * AJ Lee has collaborated with the Beautiful Disaster clothing line to design t-shirts, the proceeds to which benefit PAWS Chicago. (BDRocks.com)

* Rumor has it that Blue Pants might be done with NXT for the forseeable future, but she herself has cautioned fans not to believe everything they read. (PWInsider, Twitter)

* Speculation on why Devin Taylor was released centers on a lack of progress in her wrestling training. (PWInsider)

* The WWE is going forward with its NXT Kids show. Bayley superfan Izzy is said to have inspired the show and may appear on it. (PWInsider, Wrestling Inc)

* Stephanie McMahon recently had a sit down interview at the Experian Marketing Services 2015 Client Summit in Las Vegas. (YouTube)

* This year’s WWE Tribute to the Troops will film on December 8th in Jacksonville, Florida and will air on December 23rd on the USA Network. (Wrestling Inc)

* Chyna has started a Change.org petition asking the WWE to induct her into the Hall of Fame. (Change.org)

* The women of GLOW attended RuPaul’s DragCon 2015 last May. Video of the appearance is now online. (YouTube)

* Bayley made this week’s WWE Network Pick of the Week. (YouTube)

* Nikki Bella gave a speech at the The Helen Gordon Davis Centre for Women in Tampa, Florida last night, speaking about her experiences in a male-dominated field. (Twitter)

* Jessamyn Duke may be following in the footsteps of fellow Four Horsewoman Shayna Baszler by training to wrestle. (Instagram)