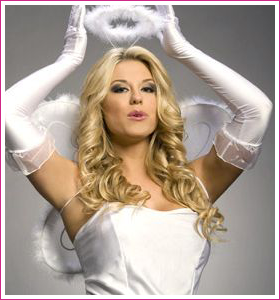 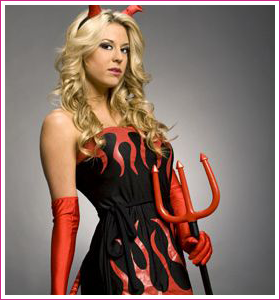 In honor of Halloween, Tiffany had posed for a photoshoot, titled “Two Sides”, showing the two typical “good vs. evil” sides – an angel and a devil. I haven’t posted a Tiffany photoshoot in a while, as most are dull and as she doesn’t have much going on character-wise, there isn’t ever much to say. This just seemed like a moment to bypass that, as this one’s holiday themed. I’m not a fan of the cliche or slutty Halloween Costumes (they’re about as creative as dirt), and an angel and a devil are about as cliche as you get. That, along with the fact that she’s posing rather dully – she’s not even playing a “good” or “bad” character when wearing the costumes – makes this an overall poor photoshoot. Maybe if they got a more capable Diva to do the concept, the photoshoot wouldn’t look so much like an ad for Spencer’s gifts.