TLC Predictions: Nikki Bella vs. Carmella in a No DQ match 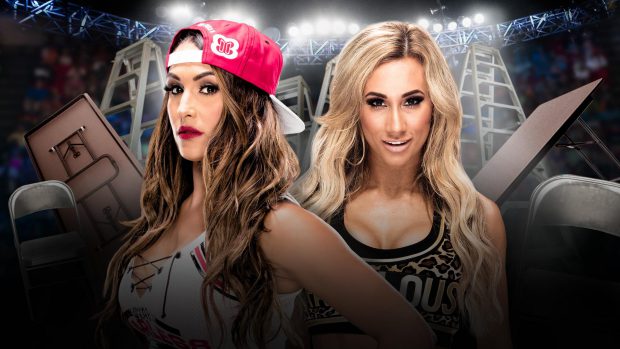 Tonight at TLC, Nikki Bella and Carmella settle their differences by tossing the rule book out the window in a No DQ contest. Which Superstar will walk away from TLC with a victory? The Diva Dirt team weighs in:

Abir: This is the last time we’ll see these women face off in a while, so seeing them really go at it is what I really expect to witness. Towards the end of the match, whilst things will be looking up for Nikki Bella, her attacker – probably Eva Marie – will interfere to cause a distraction/take her down, leaving Carmella with the victory.

Alex: While I’m enjoying this feud, I think it’s coming to an end tonight. Nikki Bella is one of the most marketable women right now, but she’s got quite stagnant – I don’t know whether it’s because she needs to take it easier, but seeing her miss out on the Survivor Series match was such a shame. She’s not had any major wins since returning, so I’m thinking tonight will be the night Nikki wins. Hopefully they bring the fight backstage and while their ring skills may be a tad below Charlotte/Sasha, I’m sure their characters will make this one entertaining to watch.

Jack: This match is going to be F-A-B-U-L-O-U-S! As much as I love Nikki, Carmella needs the win more here, and I see her as the natural next challenger for Becky‘s title, if Naomi doesn’t get a look in that is. I predict a screwy finish, which will lead into a new feud for Nikki, either with Natalya or Eva. Carmella wins.

Josue: I’m glad these two have been given a stipulation match to work with. After Carmella’s beatdown at the hands of Nikki on SmackDown, I’m anticipating a lot of aggression for this match. Carmella never actually took responsibility for Nikki’s Survivor Series attack, so I think tonight will be the night where the true attacker will be revealed. My thoughts are that Eva Marie will make her WWE return, cost Nikki the match and give Carmella the win!

Matthew: I would say Carmella would get the win over Nikki because of two things: One, to propel herself as a ruthless heel who might get an opportunity for the SmackDown Women’s Championship; and two, Nikki is still popular among casual fans but this loss wont hurt her in the short term.

Stephanie: I’ll be happy with either competitor winning but Carmella needs the win more here to solidify her as a ruthless heel. Their feud has been steadily building over time and her matches with Nikki and the other women have gotten much better. Carmella is in a place where this match will really test her abilities and working opposite Nikki has given her the opportunity to improve in the ring, increase her pacing and impact. Nikki already has the crowd behind her, a win for Carmella would give her the heat she needs to move into another feud that would egg the crowd into wanting to see her get her just desserts. Carmella wins.

BREAKDOWN: 5 for Carmella, 1 for Nikki Bella.