TLC Predictions: Becky Lynch vs. Alexa Bliss in a Tables match for the SmackDown Women’s title 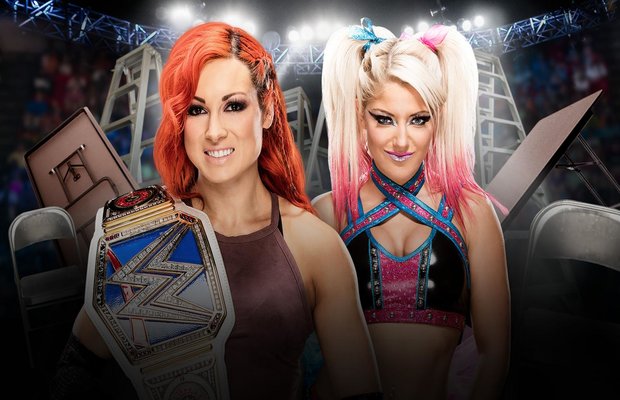 Tonight at TLC, Alexa Bliss challenges Becky Lynch for the SmackDown Women’s title in a Tables match. Which Superstar will through a table by the end of the night? The Diva Dirt team weighs in:

Abir: I’m extremely excited for this one. Both women hates the other so much that I truly expect it to be a full out brawl. I’m *hoping* we won’t see Alexa Bliss smash herself through a table with a missed Twisted Bliss, and am hoping/predicting that we’ll see Becky win through a Bex Plex from the top rope. But either way, Becky will win.

Alex: Having the table stipulation added to this match should be exciting, it’s the edge that these two needed to take their skills to the next level. While Becky is an underdog, she’s barely dipped into her reign as a Champion which is why I see Becky winning tonight. Due to Alexa’s petite stature, I’m hoping this leads to a really cool spot when she goes through the table. I feel that this match needs to be at the start of the card and hopefully a great showcase to show that they can run with the ball too… no pressure ladies!

Jack: I’m calling Alexa Bliss to miss a Twisted Bliss, sending her crashing though a table set for Becky. The Irish Lass Kicker will follow that up with a BexPlex through a table in the corner, keeping the title with the luck of the Irish. Even if that lovely scenario right there doesn’t happen, Becky is taking this one still. Becky wins.

Josue: I don’t see Becky dropping the title just yet. I think we’ll see a lot of fun spots and near calls in this match but it will end with Becky Lynch knocking Alexa off the ring apron and into an already set up table outside the ring. Becky Lynch for the win!

Matthew: I’m picking Becky Lynch to get the job done. This should be intense and physical as this rivalry is the most important on the SmackDown side of things. Alexa Bliss deserves every opportunity she can get but she’ll fall completely short in this one. I’ll say this much; Becky Lynch is for real.

Stephanie: I’m rooting for both women as I believe working with Becky will really raise Alexa to the next level. Becky will win so she can continue her reign and take all comers but I expect Alexa to put becky through one of the most intense battles we’ve ever seen involving tables. Neither girl will be afraid to fight dirty and I’m hoping we see either a Bex Plex through a table or an attempt at a Twisted Bliss through one. This match and our No DQ match are the ones to watch. I’m thinking we’ll get to see the women really push to make it a very memorable night, continuing to elevate the SmackDown women’s division and set the ground work for everyone’s next feuds.