TNA Against All Odds Predictions: Gail Kim vs Tara 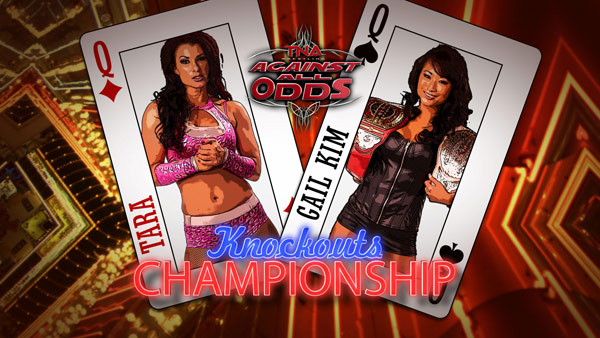 Tonight at Against All Odds, Gail Kim defends the Knockouts Championship against Tara. Which Knockout will walk out with the gold? The Diva Dirt team weigh in…

Bobby: In TNA, there really is no solid base to make a prediction because anything can happen at any given time. Just because Tara was only recently pushed to the challenger spot doesn’t mean she automatically won’t win here, as you might expect in WWE. With that being said, I don’t really see the reign of Gail coming to a close just yet, and I would like to see this feud escalate beyond Against All Odds. If Mickie James is indeed going heel, it would be quite interesting to perhaps get Gail, Tara, Mickie, and Velvet in a steel cage match at LockDown, but as for tonight, I see Gail Kim retaining the title.

Cryssi: Does anyone actually think Gail is going to lose the title to Tara tonight? Please. Gail Kim is TNA’s ‘it girl’ and quite frankly, she always has been. Tara definitely won’t be the one to take the title from someone who will likely hold the Knockouts Championship forever, so Gail Kim retains. On a personal note, I would much rather have Tara and Brooke back as Knockouts Tag Team Champions. That was another premature title reign that got cut way to short thanks to Gail’s return.

Katelyn: I think Gail Kim will win this time around, but feel that the next time Tara (or Velvet… wishful thinking) faces her, she’ll drop the title to them.

Melanie: I’m a big fan of both of these Knockouts and enjoy their chemistry together in the ring, but as far as tonight’s match goes, I’m going with Gail Kim retaining. I’d like to see her hold the belt for a couple of more months. It would be great, however, to see Tara to get another title reign — but perhaps save it for April’s LockDown pay per view.

Who do you think will win? Tell us in the comments…

Join us for live coverage of Against All Odds tonight here on Diva Dirt, as well as our Twitter page. Following the match, we will be presenting a Sunday edition of Diva Dirt Live at 10.30pm ET, where we’ll discuss tonight’s show and take calls.