TNA Hardcore Justice in Review: The Killer Queen Reclaims Her Throne, But Not Without Controversy 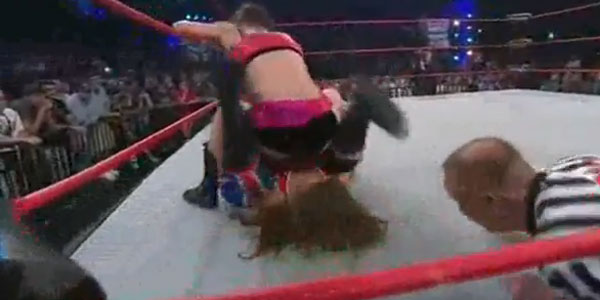 Hello everyone, and welcome to the official review of all things Knockout related from last night’s big event, Hardcore Justice. Brooke Tessmacher defends her Knockouts Championship against Madison Rayne in a match that’s been building for… two weeks. Still, the question remains, whether or not Earl Hebner will be allowed to referee the bout despite some unique calls to a few of Madison’s showings leading up to tonight? Our Knockouts executive, Brooke Hogan has been seen as frequently as the Knockouts Tag Team Titles, so there’s no telling what will be allowed to happen this evening. I suppose the only way to find out is to get started, so let us begin.

A tale of the tape flashes upon the screen to the voice of Mike Tenay stating that Earl is already in the ring ready for the match. Well then, I guess one of our questions is now answered. I begin to wonder why Brooke didn’t go to whatever the equivalent is to a Board of Directors for TNA, but before I can finish pondering this thought, our benevolent Killer Queen walks out looking great. She snatches away at a pro-Tessmacher sign, as Taz begins some random talk that confuses me. As the Queen executes some poignant waves, she’s interrupted by the reigning champion, (Miss) Brooke Tessmacher. She cheers along with the fans and then gets ready for the big defense as the bell sounds.

The two lock up and exchange holds for a bit, as Earl backs Tessmacher off and they continue to jockey for position. Earl seems to fairly pull Madison away as well, sparking Brooke to attain a few roll up variations, albeit none for a three count. Rayne proceeds to slide outside to get some air, before taking the advantage from Tessmacher with a sick clothesline. Madison continues to dismantle the champion, as she applies the boot choke in the corner. A hair toss sends Brooke flying across the ring like a migrating bird, before being sent into the ropes. Tessmacher comes back with a kick and a nice crossbody. She starts to gain some momentum, but Madison quickly ends that.

Rayne with a nice Northern Lights Suplex, but Brooke kicks out. The crowd gets behind Tessmacher, as she faces the wrath of Madison. Rayne with the scissor stomp as she taunts Earl from afar. Nonetheless, Rayne only gets a set of two counts. Madison now screams at Hebner, allowing Brooke to hit a jawbreaker. Tessmacher now starts to mount a comeback with a series of punches and clotheslines. Brooke with a running forearm as she pumps the crowd up. She goes for the Tess Shocker, but Madison fights out and sends her into the corner. Rayne misses a back splash, as Brooke scores with the faceplant! She ascends to the top rope looking for the elbow, and she hits it! Madison now rolls towards the ropes and manages to get her foot up. Brooke argues with Earl, as Madison rolls her up and grabs the ropes for the victory!

Thoughts: I enjoyed the match between Brooke and Madison overall. It was a bit slower paced than her bouts with Gail, but obviously it would be since Gail’s style is so electrifying compared to Madison’s. Personally, I’ve never found anything wrong with Madison’s wrestling ability like I’ve seen others say, and I like her as a character. I still don’t really understand the storyline with Earl, but I’m glad that they at least went for the “using the ropes” concept I had been feeling would fit better from the start because it at least felt much more believable than if Brooke would’ve rolled Madison up, yet Madison took the win even with her shoulders down for the count.

Okay now onto the title, which I’m personally just indifferent to at this point. I’ve learned before to never expect long title reigns when it comes to the Knockouts (unless it’s the tag titles, in which I’ve learned to just never expect seeing them at all), and even if Gail had that strap for ten years, I still wouldn’t expect the stigma to change otherwise. I do hope Madison gets a nice reign as champion because I am a fan of hers in every aspect, but I’m not holding onto hope. It feels like Brooke was simply used to get the title from spotlight A to spotlight B (even though it would’ve just been easier to have Madison win it when she actually challenged Gail back at Destination X, I believe it was). Brooke just came off beating the longest reigning champion in history, only to serve a brief run with the belt before losing it herself. It’s just kind of strange to me, and very reminiscent of Velvet Sky‘s multiple year build up to winning, only to last a mere 28 days as champion.

I still say Earl Hebner will have a reign as Knockouts Champion by the time the year ends, and we’ll probably have a few more added onto that from various women. It is what it is in the long run. Granted this wasn’t as short as Velvet’s reign, but there was still so much more for Brooke to do as champion. I actually loved Madison’s most recent reign when she was feuding with Mickie, and wouldn’t have been against her being the one to dethrone Brooke down the line at all, but I don’t think Brooke even had a chance to do anything with the title after Gail’s rematch clause was over which stinks.

What’s done is done though, and we must continue on! Congrats to Madison, but it’s a shame for Brooke. Hopefully Tessmacher at least gets to continue being on TV and doesn’t become one of the women who struggles to appear even once every few months. And I also hope that Madison gets a reign filled with segments and storylines since the title is actually on someone I feel like TNA would devote character development to. I don’t know what Madison can do as champion since she’s pretty much feuded with everyone TNA uses already, but maybe this will help bring in some newer, or underused talent to step up if they run out of fresh options? I’m not sure, but I want to look on the bright side and hope that this is the start of an actual good reign where the belt can gain the prestige that these short shifts take away from it.