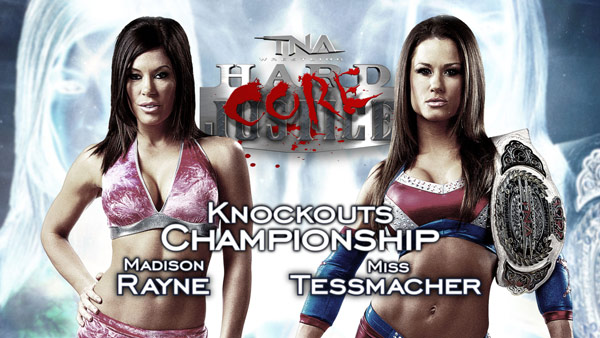 Tonight at Hardcore Justice, Brooke Tessmacher defends her Knockouts Title against Madison Rayne in a match that is almost guaranteed to be controversial given the latter’s relationship with senior official, Earl Hebner. Who will come out on top? The Diva Dirt team weigh in…

Bobby: I feel like this feud is kind of odd, only in the sense I don’t get why Earl should even be allowed to referee their match in the first place if he’s showing favoritism to Madison weeks ahead of time. Nonetheless, I don’t know what to expect. I like Madison as a champion, but Brooke’s reign is just getting started and she hasn’t even scratched the surface of what she’s capable of doing with the title. My vote goes to Brooke Tessmacher in retaining, and hopefully soon a feud with Tara that amounts in a huge heel turn for the vet where she snaps on her protégé turned champion for stealing the limelight from her!

Cryssi: Well, I certainly don’t want Madison to win that’s for sure. This whole angle with Earl Hebner is creepy, even for me. I haven’t even been keeping up with TNA, but I think Brooke needs to continue winning and keep defending that title, so yeah, Brooke Tessmacher for me.

Erin: Clearly, Earl Hebner is going to factor into this somehow, whether in tipping the odds in Madison’s favor or swerving her and costing her the match. It’s tough, because I can see the storyline extending from either of those scenarios. I guess it just comes down to who TNA wants at the top of the mountain. I’m thinking, with the effort they’ve put towards revealing Hebner as Madison’s “crush”, they’ve got more in store for her than just the “honor” of making out with a referee. I’m gonna say that Madison Rayne wins the Knockout’s Title and continues to string along Hebner so that she can have a dominant reign.

Jake: This match is such a toss up. I really don’t see Brooke losing her title so soon. That girl worked hard to earn that belt. Not to mention since she’s become champion she’s defended the belt in some pretty stellar matches with the Knockouts, and appeared on posters for some insurance company I will not be using. She certainly has momentum but she’s never had to deal with a biased ref before. With Madison’s new “relationship” with … this is taking long to write. I had to go vomit thinking about kissing Earl Hebner. Well, with Madison apparently having a crush on Earl it looks like she has him in her back pocket. IF he is the referee for this match, we may have a new Knockouts Champion. Hebner does have a history of making some unfair calls in wrestling. Hebner is the wild card here but ultimately I see Brooke Tessmacher getting the win in this match. If she debuts new attire on Sunday, then it’s a guarantee she’s winning.

Melanie: Hmm, this is a tough one to call. I have been saying for months that I’d like to see the Knockouts get actual storylines so they can really capitalize on where WWE is going wrong, but as they say, be careful what you wish for. A storyline with Earl Hebner and Madison Rayne is not what I had in mind. I can’t say this storyline is inspiring me to watch Impact, in fact, it’s having the opposite effect. I guess the tease here is that Earl may be the referee in the title match tonight and may screw Brooke out of the title. However, if that does happen, wouldn’t it make TNA’s own storylines incredibly ineffective? Why hasn’t Brooke Hogan been keeping an eye on things and why isn’t she making sure Earl doesn’t referee Madison’s matches? A Madison win here would prove how ineffective TNA’s own storyline with Brooke Hogan has been. My scenario would be to have Earl as the referee, but just when it looks like he’s going to cost Brooke Tessmacher the title, Brooke Hogan would appear and appoint a different referee for the remainder of the match, thus quashing Madison’s sneaky attempt at becoming champion again. However, if Madison does win, what would the payoff be? She could surely use Earl to ensure she keeps the title around her waist for months to come, but there’d need to be a big payoff, right? I don’t see much excitement in a current Knockout eventually taking the title from Madison, because she’s wrestled them all before. They’d need a big payoff for when Earl and Madison get their comeuppance — perhaps a big debut? Perhaps the return of Awesome Kong? I think it could go either way, but I think because Brooke still has a lot to offer as champion, I’m going to go with Brooke Tessmacher retaining tonight.