TNA Lockdown in Review: A Minute to Win It 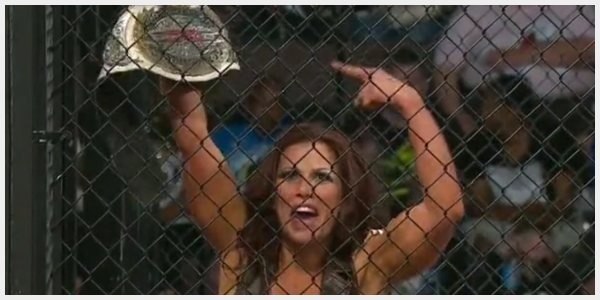 Hello, my lovelies! It is TNA’s time of the month again..har har. It has finally come down to Lockdown! For months, we have seen these two women battle back and forth, one being tormented for everything she stands for while the other uses her power as champion to run rampant. It is finally, and you will hear me say that a lot, FINALLY, time to settle the score between these two. Since the day she debuted, Mickie James has had her eye on Knockouts gold. In a Hair vs Title Match, locked in a steel cage, we are finally going to find out if Mickie has what it takes to become a triple crown champion. If you didn’t watch, I urge you to check it out now because you don’t want to miss it. No, seriously, don’t blink because you just might. Onward!

We first see our Knockouts backstage, where Christy Hemme states that she is personally rooting for Mickie James to win this bout against Madison Rayne. Speak of the devil, she walks up behind Christy and taps her on the shoulder, calling her Big Red. Tara is with her, not looking at all happy with her current position. Madison, wielding scissors, has an atrocious crown on her head and she tells Christy that her rooting isn’t going to help Mickie win the match. Christy counters with a question, asking Madison how it feels to know that tonight could be the last night she wears that belt. “What internet site did you read that on?” I’m gonna go with Diva Dirt, because we are all rooting for Mickie tonight. Ahem.

Madison claims she is not going to lose that belt and actually, tonight is going to be the last night that Mickie’s adoring fans see her with hair. Madison says she is going to royally kick Mickie’s ass then takes a chunk of Tara’s hair and pretends to cut it off. I’m sorry but if you get scissors near my hair, I’m probably going to cut you. You’re lucky all Tara did was get in your face. I’m just saying. Madison goes on to address “Attitude“, saying she’s had just about enough of her. Furthermore, she doesn’t trust Tara and she doesn’t need her out there tonight. So she can take her stupid bow and sit in the back to watch how a real champ takes care of business. I love how Tara turns to a baby voice and mocks Madison. It’s about time you stand up for yourself, girl!

Cue the video package from months of torment and tyrannical activity.

Finally! On to the match we go and Mickie James is out first, taped shoulder and all. HARDCORE COUNTRY! She is looking quite the part tonight although, I’m not keen on those shorts. But, if she’s going to lose her hair, at least it will nice and pretty for the pictures. She barely has enough time to get to the far turnbuckle in the ring before SHE’S A KILLER QUEEN! Madison comes out, taunting with her scissors and clippers that she retrieves from a very ugly purse. A Queen should be equipped with better fashion, honestly.

Madison, taking her sweet time getting to the ring in her beer wench attire, finally gets in the ring. She’s handed all her essentials to So Cal Val and then attempts to take off her crown. The official referee Earl Hebner starts to pull but Madison screams at him until he backs off. She demands to know if he’s stupid, which, I’ll keep my opinion to myself on that one. She finally unclips whatever was holding it on and hands the ugly thing to Val, who doesn’t look at all happy with being a servant. And now finally, FINALLY, Hebner calls for the bell and the door is closed. We can get this show on the road because, as you can see, we’ve been at a pit stop for far too long.

Mickie, itching to get hold of Madison, wastes absolutely no time in taking her tormentor straight to the steel. She tosses the champion like a lawn dart into the far side of the cage, then gives her no time to get up before tossing her into the other side. A final toss into the camera side and Mickie grabs for her shoulder but still sets Madison up for a Mickie-DT. She jumps up and lands it, going for a pin and it’s THREE!!! HARDCORE COUNTRY! No one can believe it and for a moment, I thought my eyes were deceiving me.

The winner of this match and NEW TNA Knockouts Champion, Mickie James!

Also at Lockdown, Sarita & Rosita get into it with Velvet Sky. Sarita and Rosita both stepped into the caged ring and began a tremendous rant on how it is so typical of TNA to keep them down and keep them off shows. It is so typical of USA to keep Mexican America down..blah blah blah. Sarita says the reason she isn’t Knockouts Champion is because we can’t stand the fact they are better than us. They have already taken over, plowed through every Knockout on the roster and they’re going to do what they want to do, when they want to do it.

Cue a rambling Rosita in spanish.

Sarita says she’s going to translate it for those of us who can only speak one language, they’re not going anywhere! This prompts Velvet Sky to come to the ring, dropping Rosita while Sarita does her best to remove her boots. Finally, Sarita takes off her shoes and gets taken down by Velvet, who slams her head into the mat then corners her with a chest chop and a toss across the ring. Kicking the trash out of the ring, Velvet takes a moment to celebrate the moment.

Thoughts: I blinked and I missed it! If it wasn’t such a long time coming, I’d say I want my money back because it was so short. You know we’re only watching for the Knockouts anyway! I honestly was watching it, cringing at the bump that Madison took on that first toss into the cage and before I knew it, Mickie was going for a pin. I knew she was going to win the championship because she was due. It’s been a long time coming and I’m honestly glad to see the Rayne of Madison come to an end, at least on the title front. Although, I’ve just been reminded she’ll have a rematch clause to cash in. Oh well. As it stands, Mickie James has officially become a Triple Crown Champion, having held the WWE Women’s and Divas Championships and now, the TNA Knockouts Championship. Big congratulations goes to Mickie James.