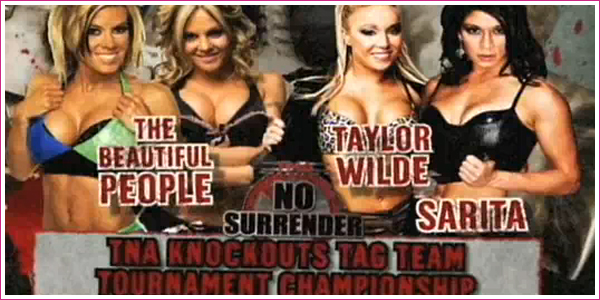 No Surrender on pay per view tonight will see the first ever Knockouts Tag Team Champions crowned! Check out our predictions below:

Knockouts Tag Team Championship: Sarita & Taylor Wilde vs The Beautiful People
Erin: Even when ignoring the fact that the Beautiful People are half the team they used to be (literally), Sarita and Taylor make such an interesting and exciting team that I can’t imagine the titles going to anyone else. They fit better as a team than any other duo they’ve manufactured for this tournament, and them as champs would make for some must-watch title defenses. Aside from that, I just don’t see Madison/Velvet being the type of team Angelina/Velvet was. It seems to be a temporary fix until Angelina gets her visa trouble handled, and once she’s back, it’s bye bye Madison. I don’t envision them putting a title on a temp team.
Melanie: I am going with Sarita and Taylor Wilde. No big reason that hasn’t already been covered. It seems like the logical and obvious choice.
Steven: I’d pegged Saritataylor as the first Knockout Tag Champs when I saw their first round match, but with Madison replacing Angelina in the finals, TNA may as well have set it in stone. Expect the high flying duo to take home the gold.
Tiffany: Sarita and Taylor Wilde seem conditioned for the tag team titles from the very beginning.  With Angelina gone, those two appear to be the most believable tag team to come out of the tournament.  Sarita and Taylor Wilde will most likely follow through on their promise to make Knockout history.

Knockouts Championship: ODB vs Cody Deaner
Erin: I hope to God that ODB wins. Deaner winning is not an option–I don’t even want to consider it. Let me just say that I hope that ODB’s victory is the end of this turd of a storyline and we can move on to actual all-female Knockouts Title matches.
Melanie: Speaking of obvious, it’s two-for-two at this year’s No Surrender. This one is obvious for me, ODB to take the win.
Steven: I think I can speak for most people when I say I’m finding it hard to care about this storyline. That said, I’m predicting that ODB will win tonight and finally kill this storyline. But then again, TNA has screwed us over before…
Tiffany: ODB will find some way to attain the title while Deaner finds many ways to make a fool of himself.  It’s an endless cycle.