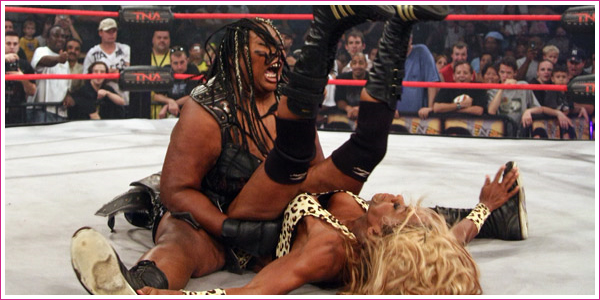 She may have been awarded the TNA Knockouts Championship recently, but Awesome Kong also received something a little less pleasant from TNA management – a telling off. Kong was put in her place by management when she requested a pay rise in the terms of her new contract, after her previous year-long contract expired in October.

Many of the Knockouts signed their deals in October 2007 when TNA launched it’s women’s division, the girls were signed to one year contracts. It’s no secret that the Knockouts are likely the least well-paid stars in TNA, with the company’s top Knockout at the time, Gail Kim, earning less than $100,000 a year.

You’d think that an actual ratings draw like our Knockouts would be able to command more money, but nope – not in TNA! TNA is in a very precarious position that I don’t think that they or any other wrestling company wants to be in: women as your top ratings draw. Good for us, because we love Divas and Knockouts but not good in the world of this male-dominated sport. WWE can justify paying it’s Divas less as the stars they book as top-tier talent are top-tier talent and draw higher ratings than the Divas. However that role is reversed in TNA with stars like Kurt Angle and Sting drawing less than the likes of Kong and the Beautiful People. Obviously the Knockouts are what the TNA viewers want to see and it’s time that they realised that rather than use this old school mentality that men are the draws when they are obviously not in TNA’s case. If I were a Knockout, I’d round up the others and stage a coup… just saying.