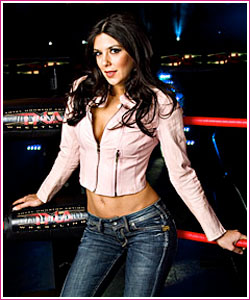 So, TNA, you don’t want to be like WWE. Here’s a list of things not to do: don’t bash their “Divas” for not being hardcore enough and then compete in bra and panties matches, don’t have most of your roster originate from WWE’s developmental territories, and don’t hire Playboy covergirls. Well, congratulations TNA, you have just done all 3 and further prove that you really aren’t so different after all!

TNA has just offered a contract to 28 year old ‘Survivor: The Amazon’ winner Jenna Morasca. She’s giving up posing in chocolate and peanut butter with another female ‘Survivor’ contestant on the cover of Playboy (for now) and opted to put on some wrestling gear. Although she is officially scheduled to make her TNA debut on the March 12th edition of iMPACT!, Jenna told EW.com that she will not immediately jump in the ring until she undergoes some training. (Get training before you wrestle? What a great idea!) As far as why she decided to enter the wrestling business, Jenna said, “Everyone is covered in glitter and makeup and stuff and then goes and beats the crap out of each other. This is perfect for me.” Once she finally gets trained and enters the ring, Jenna has decided to keep her real name as her in-ring name. Is the question of why she decided to do this eating at you? No worries, EW.com asked Jenna this too, which she responded by saying, “I’m gonna be me because it’s more beneficial to know it’s me from Survivor. If I had to take a name, it would be a terrible stripper name like Candy Cane Lane.” Finally, when asked what would happen if someone puts chocolate and peanut butter in the ring, Jenna said, “Oh, then it’s on! Death to all!”

Wow, TNA, you’ve really outdone yourself with this one! I might be sounding bitter about this, but don’t get me wrong, if she can wrestle then by all means let her get in the ring. However, this sounds like a ploy by TNA to get some mainstream media attention. Notice that the first outlet to break the news was Entertainment Weekly. Once she said the reason she was attracted to wrestling was because of the glitter, it pretty much did it for me. TNA is taking a page right out of WWE’s book with this hiring and this is probably the main thing that annoys me; TNA bashes and criticizes the WWE left and right yet goes and pulls this. Well, I guess we’re just going to have to keep the TV off tune in to iMPACT! on March 12th to see how TNA tries to work this publicity stunt! What do y’all think of this news?