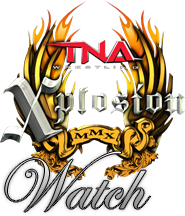 TNA finally saw fit to air this match they had taped for Xplosion a few weeks ago. As a result, we will see Sarita taking on Angelina Love, who has the Knockouts title around her waist. One would’ve thought they would air it before she lost the belt at Bound for Glory, but apparently not. Who will come out the victor? Find out below…

First out is Sarita, in a purple and orange ensemble that leaves me shaking my head. The colours~! Mismatched sleeves and the shorts look two sizes too small. She confidently makes her way to the ring, smirking all the while. Next out is Angelina Love, doing her usual BP pose, wearing one of her standard silver outfits. She enters the ring, holding the belt high. JB points out that this is a non-title match and Sarita believes the Knockouts Champion is ducking her. As Taz disagrees with this belief, the two lockup.

At first, neither can get the upper hand, they both seem to be equally matched. Angelina finally backs Sarita into a corner, breaking cleanly when the referee gets between the two. Once more they lockup and trade holds, doing a nice piece of chain wrestling, until Angelina is hoisted up on Sarita’s shoulders. She might’ve been looking for a variation on the sidewalk slam, but Angelina counters into a beautiful armdrag that sends Sarita flying across the ring.

Sarita tries once more to get the upperhand, picking Angelina up and bouncing her legs off the top rope, but again it’s countered into a nice side headlock take down! The crowd claps for this show of skill as Sarita squirms, managing to roll Love backwards onto her shoulders for a two count.

The two get to their feet, Love not releasing the headlock until Sarita maneuvers out and grabs the blonde by the hair, slamming her back first to the mat. But she’s momentarily distracted by the ref, allowing Angelina to get to her feet and return the favor, using Sarita’s hair to slam her back first to the mat. As she gets back up, Angelina uses the ropes for momentum and shoulder blocks Sarita down. The brunette rolls to the outside for a time out. She stalls as the ref tells her to get back in the ring, until Angelina gets fed up. Time for a cat and mouse chase around the ring, until the referee himself exits and cuts Angelina off. Sarita takes this time to roll under the ring, unseen by either Love or the ref. She re-emerges behind Love and hits her with a forearm, driving her to the ground. Sarita preens for the camera as we go to a commercial break.

Upon returning, the Dark Angel is in clear control, delivering a flurry of offense to the KO Champ, then tossing her outside the ring. She follows up with kicks to Angelina’s midsection, slams her face into the ring apron, and rolls back into the ring while Love tries to recover on the outside. At the seven count, Love’s up on the apron and catches Sarita with a fist to the face. The brunette counters with a hot shot on the top rope, then pulls Love into the ring. Two covers, two kick outs, so Sarita changes tactics.

Rolling Angelina onto her stomach, she puts the knees to the small of her back, then hoists her onto her shoulders for a version of the rack. When Love refuses to quit, Sarita dumps her face first into the ring! However, she chooses not to follow up with a cover but instead….she does some type of funky dance over Angelina. Okay. She does this for a few moments before going for a lazy cover, which Angelina kicks out of.

Sarita argues with the referee, which allows Love time to recover. She hits Sarita with some fists to the stomach, then hits a flying crossbody block. However, the Dark Angel shifts the momentum back to her, working over Angelina’s back once more. Another lazy cover gets only two, so she attempts another rack on the champ, but Love squirms out of it and kicks Sarita. The blonde follows up with a few clotheslines and a neckbreaker. Love attempts the Botox Injection, but Sarita moves out of the way and rolls up Angelina. Using the tights as leverage, Sarita gets the 3 count and the win! After exiting the ring, she drops to her knees, gloating as Angelina is in disbelief.

The first part of this match really impressed me. I didn’t think Angelina had a range of technical skills, but she was able to use some impressive counters against Sarita. There was a fluidity to their match at the start. It felt like it sort’ve broke down mid-way through, especially the way Angelina got out of the second rack, that felt a bit messy. Good ending, however, having Sarita use heel tactics to get a win over the then-champion. It probably won’t get her anywhere, seeing as Angelina’s no longer the champion and Mickie James is gunning for the title, but it was still nice to see Sarita wrestle. Not a bad match by any stretch.