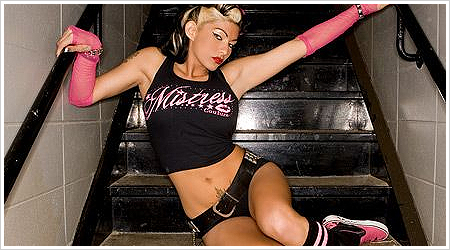 TNA’s Salinas, better known to you and I as Shelly Martinez was propositioned by couple, Jonny Fairplay (Survivor) and Michelle Deighton (America’s Next Top Model) backstage at the company’s Destination X pay per view. Fairplay confirmed the rumour on when he appeared on the Voice of Wrestling radio show:

Jonny Fairplay was on the Voice of Wrestling radio show tonight and confirmed rumors that he and his fiancÃ©e asked TNA Knockout Shelly ‘Salinas’ Martinez for a three-some backstage at the Destination X PPV. “Yah, it’s true” he said. Fairplay and his fiancÃ©e Michelle Deighton (who is bi-sexual) openly asked Shelly ‘Salinas’ Martinez for a three-some in front of a bunch of people backstage. Deighton (former contestant on Americanâ€™s Next Top Model) and Fairplay were both backstage with their little daughter Piper.