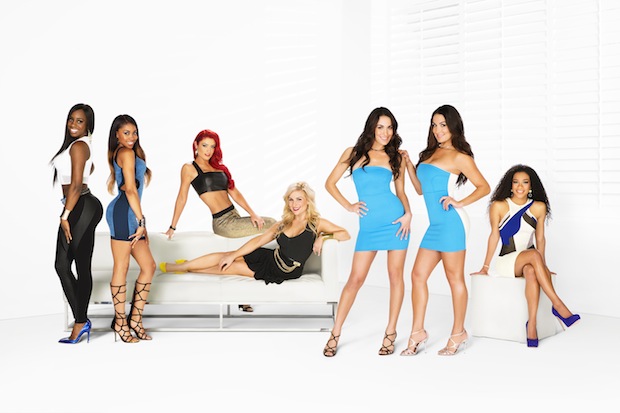 WWE and E! may not be the most conventional of tag team partners; the network known for its estrogen-fueled programming like Keeping Up with the Kardashians paired with burly men battling it out in spandex? That’s like chocolate on a hot dog. Until now…

Enter the WWE Divas! Throw in a pinch of WWE Superstar love interests – hey John Cena! – and a smidge of WWE’s soap opera-esque storylines, and you’ve got a reality show to rival those table-tossing Real Housewives.

It becomes immediately clear from the first episode of Total Divas, what with a disheartened Natalya being ‘pulled aside’ to be told she won’t be part of WrestleMania, that this show – like most reality shows – takes creative license with the word ‘reality’, and much of the drama and scenarios is constructed for the sake of entertainment. But that’s okay. At the end of the day, TV is entertainment, E!’s reality shows are certainly for entertainment, and if you realize this is only entertainment going into it, you’ll be entertained. We were!

RELATED: Five Teasers for ‘Total Divas’: What to Expect When the WWE Divas Take Over E!

Total Divas plays on WWE’s strengths in storytelling and preys on its fans’ desires to get to know its Superstars and Divas outside the ring, to know who they’re dating, who they’re bickering with in the lockerroom etc. The show is almost an additional hour of WWE’s scripted programming – like Raw and SmackDown – but its storylines are different; it’s almost an alternate universe with its own version of characters you know from the other two shows. That’s not to say you don’t get an interesting peek behind the curtain – you do – and some of the scenes do feel genuine, particularly the tender moments between our starring Divas and their wrestler beaus. Ladies, I defy you to not find John Cena sweet and adorable and slightly fall in love with him! Two words: The. Notebook.

As for our leading cast, it’s great to see the Divas be able to show off more personality – be it in character or out – and I think viewers will really love seeing a feistier side to Natalya, and just what a ball of energy Cameron is. Of course, the show is lead by the Bella Twins, Brie and Nikki, in bad girl mode but it’s also refreshing to see their softer sides with Daniel Bryan and Cena respectively.

This show is a reality show for reality show fans, so if you’re a Real Housewives junkie like myself, this will be totally up your alley. (I hope there’s an Andy Cohen-like reunion show!) The key words here are ‘fun’ and ‘entertainment’ – two things Total Divas has in abundance. It’s easy viewing for a Sunday night, it has plenty of bold characters that you’ll love, and plenty of reality show drama that’ll make you go, ‘OMG!’ Total Divas knows its market; it has the appeal of other shows in the field like the Housewives – Real, Basketball, or other.

Let’s be clear, though: This isn’t a wrestling show; this isn’t a PBS educational show (that would be really boring) – so, sorry wrestling purists! WWE and wrestling happen to be the vehicle by which you are getting to know these women, and sure, wrestling is a part of the show, but ultimately it’s a reality show about the lives of the ladies on the cast.

Total Divas is a juicy new addition to the guilty pleasure reality show genre and wholly satisfying if you’re looking for a calorie-free, naughty indulgence. The only downside? Going cold turkey until next Sunday!