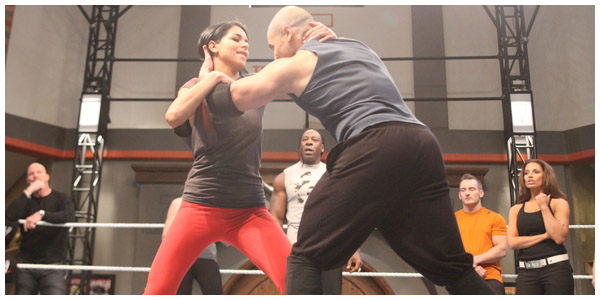 Following a glorious premiere episode last week, waiting six whole days for a new episode of Tough Enough felt like a mammoth task. Not going to lie, the anticipation left us feeling like Amy Winehouse looking for her next fix as we marked down days on our calendar. We even got the shakes. Alas, episode two finally graced our screens last night.

Will it live up to the hype of week one? Will Ivelisse and Christina get some more screen time? Will Miss 11 Years redeem herself? Will douchebag Michael with a K finally get punched in the face by ‘Stone Cold’ Steve Austin?

After surviving elimination the previous week (how’s FCW treating you, Ariane?), Michelle feels she has to prove herself in daily training this week. “I have to step it up or that’s it,” she says with conviction. Miss 11 Years is in full Rocky training mode, taking bumps and running the ropes. Rawr! Michelle means business.

Stone Cold explains that this week’s life lesson is courage. You know, that thing you can find at the bottom of a bottle beer can. Anyhoo, Steve explains that he’s seen people paralyzed in the ring and even die in the ring. (At this point, I’d be running away…) What may have been cut from this scene — but is totes equal in importance — is that nails can break in the ring and weave can fall out in the ring. Really! I mean, have you tried getting in a quick appointment during your lunch break to fix a broken nail? It’s near impossible. Get out while you can, Miss USA!

Back to training now and something miraculous has happened… OMG, she speaks! Praise be to Gail Kim! After being an afterthought for much of last week’s first episode, Ivelisse finally gets a little confessional video in which she explains that she ‘lives, breathes, eats and sleeps’ in the ring. Hey, that would be a fun reality show in itself: ‘Extreme Makeover: Ring Edition’. I’d love to see a cooker fitted in the corner of the ring… I’m sure Bill DeMott would too.

Quick opinion poll: Who wants to see a clump of hair? “That happens all the time,” she says showing off her ripped out hair like a badge of honor. Yeah, thanks for that, Ivelisse…

Perhaps the most palatable thing to see after having a clunk of hair hocked in your face? The fierce Miss Trish Stratus. Or #TrainerTrish. (Make it happen on Twitter, peeps!) Last week we decided that #TrainerTrish is a totally different character from the Trish Stratus we know and love, and that was very much on display this week. In fact, one could insinuate — not that we’d ever dare #AllHaillTrish *halo smiley* — that she is the reason that independent sweetheart Matt Cross was cut this week. Trish puts Matt on the line, telling him to show her what he’s got in the ring. All that pressure on him, no wonder the poor boy had ‘performance issues’. “I gave you a chance to show me again, and you gave me nothing,” says a disappointed Trish. Sealed his fate? One could say so. (Disclaimer: Not us! *Halo smiley* #AllHailTrish)

Well, hey there John Cena! Only the top guy in WWE right now, with years of experience on what it takes to make it in the company. So we should pick his mind, right? What advice can we get out of him to better prepare ourselves? Nah… Let’s just ask his hand in marriage! Really, Miss USA? Really?! This is what Skidmark thinks of your marriage proposal.

But we can’t stay mad at ya forever, Miss USA. Oh ye of envious beauty… sigh. She knows just how to win us back by proving what a tough cookie she is taking bodyslam after bodyslam. I was certainly impressed by the beauty queen’s tenacity.

Douchebag Michael with a K scene of the week: Picking on poor, lovestruck Skidmark. “The girls here have a lot more balls than he does.” This coming from the dude who is financially supported by his wife… Bitch, please.

It’s time to test the contestants’ courage now and hey, what better way to test their courage than by sicking Cujo on them?

Cujo pretty much makes Christina flip like she’s an Olympic gymnast, before taking out a chunk of Rima’s hair. “Maybe I’m crazy but then again, that’s WWE.” No Rima, I don’t think Hornswoggle is going to tackle you and gnaw at your head in WWE. He may try to hump your leg though…

It’s time for this week’s skills challenge, ‘Five for Flinching’, in which the contestants will take a big splash in the corner from Bill followed by five bodyslams. Sounds like a fun way to start the day, no?

After several of the males meet their maker… er, Bill, it’s Ivelisse’s turn to bat. Ivelisse stands in the corner, looking tough and as though she’s trying to get herself in the game, but as soon as Bill crashes into her like a ton of bricks, she lets out a heart-wrenching scream. We salute you, Ivelisse. I have a tear in my eye just from watching that… Ivelisse continues to let out blood-curdling screams as she’s slammed against the mat.

Next is sweet, ickle, innocent Christina just chillin’ with a flower in her hair. Nevermind that your doom is impending, Christina. Rima does a valiant job taking the bodyslams. Finally, it’s time for Rocky to be bulldozed by Bill. “She took that like a son of a bitch, didn’t she?” says Stone Cold. I believe that’s a compliment. You go, you son of a bitch, you! Following her iffy start in week one, Michelle really stepped it up and impressed with her bumping in this task. Kudos to her.

With the challenge over, the trainers deliberate on who will be in the bottom three. #TrainerTrish’s no-nonsense evaluation of Matt may seal his fate, as he’s in the bottom three with Skidmark and Miss Late USA. Raise your hand if you think Rima’s going home? No, me either…

It’s time for the final showdown~ Miss USA in a super cute jumpsuit looks totally out of place with that hideous belt on her shoulder. She says that people see her as a ‘pretty girl’, but she’s willing to prove everyone wrong. I feel your pain, Rima. Being pretty is just such a burden…

“You damn near put her to sleep,” says Stone Cold of Matt’s attempt to impress #TrainerTrish. No wonder Trish looked like she was aging in reverse during her ‘Mania comeback: She was getting plenty of rest after spending time with Matt.

Following last week’s shocking ‘butt padding’ scandal, this week: “RIMA REAMED! Miss USA blasted by Stone Cold!” Rima, Y U NO show up on time?! “Were you late because of arrogance? Because you think you’re the prettiest sumbitch in here?!” Well, I’m sure she doesn’t mean to brag but…

More lines of the week:
“Safe ain’t gonna get you sh*t in this world.” – Stone Cold (Safe won’t get you STDs, though!)
Matt: “Permission to say something?” Stone Cold: “GODDAMN!”

Mama, hold me! Scary Mr Austin. “Don’t you EVER be late. I guarantee if you are ever late, your ass is gone,” he says to Rima. Skidmark may need to share his nickname now…

Despite being reamed by Stone Cold, Rima survives another day as Matt Cross, independent sweetheart, is eliminated. Skidmark, you better call Tiffany and tell her not to make you dinner tonight.

Compared to last week, this episode wasn’t quite as enjoyable as the premiere. Perhaps the lack of dramz had something to do with it? (More Miss Ghetto USA!) I can only hope for some Real Housewives-esque table-flipping soon. And if someone gets called a ‘prostitution whoarrr’, even better! *Cough* As you can tell, I love quality television programming…

Once again, the focus seemed to be much more on Rima than the other girls, with only a few seconds dedicated to Ivelisse, Christina and Michelle. While I still like her, I was more iffy on her this week — the Cena question in particular, as well as the lateness did her no favors. Still, I think she shows heart and is cute as a button! Speaking of cute as a button, Christina seemed to be the quietest girl this week with nary a mention. Methinks she needs to dial up the Foxy Crawford fierceness to stand out some more. If she’s anything like her sister, I know it’s in there somewhere! Michelle impressed this week in the ring, but comes across pretty bland to me. I can’t quite put my finger on it. If I had to axe one girl… sorry Rocky! As for Ivelisse, she seems like she knuckles down and gets on with it without complaint. I feel like we’ll see her in the background for several more weeks before she emerges, dark horse-style, as a serious contender.

What did you think of this week’s episode? Who impressed you? Tell us in the comments!