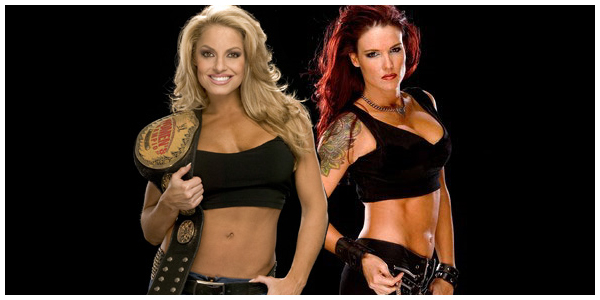 They are asked what they’re up to. Trish says they’ve been talking for a while about ideas to do together. Amy says they both knew they were retiring and wanted to go out with a bang. They went to many different roadside attractions like Graceland & the Alamo. Would joke and say, “What are they going to do? Fire us?” Traded DVDs with each other, especially Mexican horror films and Mexican wrestling films. Trish says she called Lita and they’re working towards doing a wrestling movie together — an homage to Mexican wrestling films. Opportunity just came up suddenly. Lita says she wants to expose modern wrestling fans to this genre. Host says you get matches in these movies, that they’re like superhero wrestlers vs monsters. Very over the top and campy. Lots of chatter about different Mexican wrestling films. Trish says they will be the wrestling women in the movie. Made mention of a wrestling move done by an actress in Iron Man 2. Lita says the project is in very early stages.

They next take phone calls. Britney wants to wrestle, but has been told she’s too little, even though she’s about Rain’s height. Advice? Trish says things might hurt a little more but she’s not too little.

Email from Stephanie about decline in WWE women’s division, what needs to be changed in WWE to give the remaining women a chance? Lita says do some research instead of modeling. Trish says there needs to be a screening process, solid wrestling background. Make the moment yours to stand out. Look at Daffney, she’s made herself stand out. Lita says you need a boot camp like Funkin’ Dojo to see who really wants it & who doesn’t. Trish feels like the women are using wrestling as a stepping stone to something else, they need to leave if it’s not their passion. Lita thinks there should be a requirement to know wrestling history, do research/homework. Both feel very strongly about knowing wrestling history and having a solid background as a requirement.

Chris on phone – they retired early. Why is it hard for some wrestlers to retire & walk away? They can come and go as they please. Trish says they have passions outside of wrestling they were able to pursue once they were out. Lita said she felt like she’d accomplished everything there was and could walk away, see what else is out there. Host asks what’s going on with the Luchagors? Lita says that music was natural for her, but the band is on hiatus doing other things with other people, hoping to get back together at start of new year.

Chris emails about rumors on Trish playing Sonya Blade in next MK movie? Trish is available but has not been contacted. Not sure if Bail Enforcers will be available in US theaters, have to wait and see.

Caller John – is there room for stronger females in a main event role? Trish says there is plenty of room. Chatter about when they main evented Raw. Didn’t know Lita’s bump was as bad as it looked until they saw the replay. Lita was sore next few days but not as bad as it looked.

Robert emails about a WWE Divas DVD. Trish says she has not been contacted. Lita neither. No new stuff done with them if there is a Divas DVD in the making (no interviews, etc.).

Caller Tony – favorite city to wrestle in? Real opinion on Chyna? Trish – Toronto. Lita – Chicago, anywhere in Texas, great fans in both places. Trish – didn’t get a chance to know her real well, wasn’t welcomed by Chyna. Did great stuff in WWE. Lita – she was great to her, worked out with her. Not spoken to her since leaving.

Caller Chris asks about their favourite movies in 2010? Lita says she wants to see Piranha 3D. Trish says she has not seen any movies, but there is a clip of Bail Enforcers on her website.

When do they get to suggest storylines after joining the WWE? Trish says they’re open to listening, timing is everything, see where you fit in. They won’t deny a great idea. Anything they didn’t get to do? Jericho and Trish wanted to be a babyface couple originally but that was changed. Anything they didn’t want to do? Trish says she had no problem barking like a dog because it built towards WrestleMania and built the storyline. Stacy & Torrie were crawling over each other & they wanted Trish & Torrie to do it with a kiss at the end. Trish refused.

Caller Marlon asks about Trish’s separated shoulder at Backlash 2006, who screwed it up Mickie James or Trish? Trish says it was no one’s fault.

Caller Barobie asks for any fave road stories? Host – fave ribs? Lita says there were 2 lockerooms and a new girl had put her stuff in the wrong one. Randy complained and got 2 women to distract the new girl. He went in and cut up the girl’s clothing and poured baby oil on them.

Email Jimmy asks if there anything they miss about the WWE? Lita says she can’t slap people around at will. Trish says she feels fulfilled doesn’t miss anything.

Trish plugs TrishStratus.com and says they will update regarding the movie there.

Overall a good interview. Both sounded very happy, excited about the movie project and other future events. Both obviously feel strongly about the current direction of the WWE women’s division and that it needs to be put back on track by hiring women who know wrestling history.