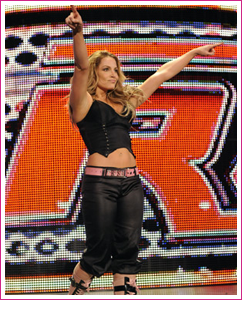 The one and only Trish Stratus made a not-so-surprise return to Raw tonight as John Cena’s tag team partner in a mixed tag match against Glamarella. The legendary Diva had been rumoured to be part of tonight’s show in some fashion for the past couple of weeks, but until tonight’s show went on the air it wasn’t known that she’d actually compete in the ring.

I have to say, I was kind of nervous about Trish getting in the ring but after two years, she’s still got it. The seven time Women’s Champ proved that she hasn’t skipped a beat in the ring with the Glamazon! The two looked great together and shared some good chemistry. Thankfully though, Trish wasn’t the one to get the pin for her team, thus keeping Beth strong.

It was four years ago this month that Trish main evented Raw in a Women’s Championship match against Lita.