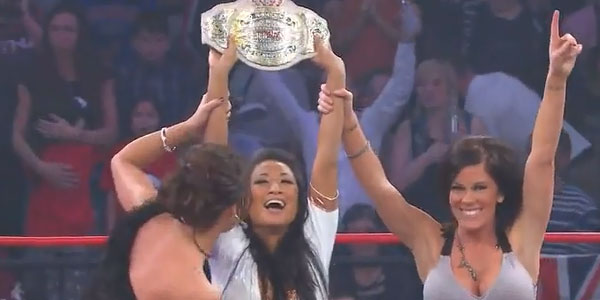 Greetings everybody. Is it I, the one and only VP of the Miss Karen fanclub, and I am here to bring you a pay per view dose of Knockouts action. Last night was Turning Point, and it was a night that I’m sure will be highly controversial indeed. First up for the ladies was Sarita (w/ Rosita) and Toxxin (Christina Von Eerie) in a six person mixed tag team match for the Tag Titles. We also saw reigning Knockouts Champion, Velvet Sky, put her title on the line against the woman brought in by the aid of Miss Karen, Gail Kim, in a match that would either give Velvet some credibility, or make Gail the ultimate Knockout in the division. Can the pigeons overcome this evil lady with a purpose? Will Gail prove that she means business in the Knockouts division? Heck, will our beloved Aunt Traci or forgotten child, Madison Rayne, make their presence known tonight?

There’s only one way to find out the answers to all of these burning questions… scroll on down!

As we head to the back, we see the phenomenal, talented, poised beacon of hope in this division, Miss Karen, standing by with her crusade of talent, Gail Kim and Madison Rayne. Jeremy Borash, for some unjust reason, asks Miss Karen if Gail is ready for the match tonight, to which our ruler states the obvious answer. The VP continues on that Kim is going to walk on down to that ring and bring that belt back with her! Miss Karen informs Jeremy that the entire Knockouts Division is a reflection upon her perfect self (note: apologies if I ad-lib a few lines here and there), and that she can not… CAN NOT… have a “nasty, skanky, little ho, smart-mouth little bitch” running around with the belt!

Miss Karen states that whenever she has a problem, she fixes it, and she did so by going out and bringing in the perfect role model for everyone, Gail Kim! She continues that she wants total Knockout dominance amongst her stable, and Gail is the perfect look for the champion to have. Our brilliant forgotten child, Madison Rayne, chimes in to gain Miss Karen’s approval, which the lady in black adds that Madison is beautiful too. Borash then turns the mic over to Gail, and she proclaims that she’s never been more ready in her life for this.

Kim calls this a piece of cake… a cake walk… and I suddenly begin to crave a piece of cake. Thanks Gail… But back to business, Miss Karen then professes that Gail does not need their help tonight because she was brought to the division to show the other girls how things are done. She is going to take care of business the WAY it’s supposed to be taken care of! The two shake hands as Miss Karen sends Gail off and grabs forgotten child, Madison Rayne, to tag along for the ride of dominance.

We then follow up with a video package highlighting the build up to this upcoming title defense, before Gail Kim makes her grand entrance to the ring. Decked out in some cool new gear, she poses with her Tag Team Champioship belt before stepping through the ropes and getting ready for her big moment. Up next comes the Knockouts Champion herself, Velvet Sky! Velvet hurries to the ring, but not before taking a moment to show off her gold to the crowd. After letting the pigeons loose, the two ladies stand toe to toe in the ring, before Velvet quickly spears Gail down and begins to beat her up.

Gail scurries out of the ring, but Velvet comes back with a baseball slide and slams the challenger’s head into the ring apron. The two ladies get back inside, as Gail goes for a kick that ends up being blocked and turned into a clothesline. Velvet continues her assault on Gail with a sweet crossbody, before taking control with a running clothesline to the corner. She follows it up going for ten punches in the corner, but after about the fifth one, Gail manages to drop her right onto the ropes. Gail then suddenly takes control with some kicks to the stomach.

She then sends Velvet into the corner and charges off with a midsection spear through the ropes. Gail knees her opponent in the stomach and snapmares her over, as… MY LIFE IS MADE! Miss Karen graces my screen with her applauding presence, as buyrates for this event increase higher than ever before due to the sight. Gail goes for a pin attempt, but only for a two count. Velvet tries to fight back and goes for another crossbody, but Gail manages to drop her with a slam onto the knee as Miss Karen applauds her girl from the stage. Kim then locks in an abdominal stretch, as the crowd begins to get behind Velvet.

Velvet manages to counter it with a flip over Jackknife cover. After a two count, she capitalizes with another quick roll up for a near fall. Both women get to two feet, but Gail Kim takes control quickly. She sends Velvet into the corner and leaps off for a reverse crossbody, but Velvet spots this coming and kicks Gail in the stomach. Velvet with some sharp kicks to the leg, before sending Gail off the ropes with a set of clotheslines. She follows it up with some facebusters to the knee, and then a great bulldog!

Gail goes for a clothesline, but Velvet drops her with the move I dubbed the “Sky Cry” for a close fall. She goes for the double underhook facebuster, only Gail shoves her back into the corner. Kim them signals for Eat Defeat until Velvet shoves her boot away and hits the double underhook facebuster! Miss Karen then takes it upon herself to argue with the referee, as forgotten child, Madison Rayne runs inside and hits the Rayne Drop on Velvet. Gail drapes herself over Sky, but the champion manages to kick out!

The crowd begins to get behind Velvet, as Gail climbs to the top rope and misses a missile dropkick attempt! Velvet goes for a roll up, but Gail reverses it, still for a near fall. Velvet signals the double underhook again, but Madison Rayne grabs her by the boot and distracts her long enough for Gail to nail the Eat Defeat for the shocking victory! Miss Karen’s stable celebrates victoriously in the ring, as Velvet’s lifelong dream is over in just 28 days…

Also on the show, Check out Sarita and Toxxin in a six person mixed tag team match for the TNA World Tag Team Titles:

As Jesse Neal and Hernandez crawl to their respected corners, they reach and FINALLY tag in Toxxin and Sarita! Toxxin ducks a running clothesline and nails one of her own. Elbow follows up, with a nice step up enziguiri. Sarita is nearly sent into the ropes, but she reverses it and sends Toxxin flying. Sarita goes for a dropkick, but Toxxin holds onto the ropes and Sarita crashes the mat below. Toxxin does some nifty lifty move to get Sarita to two feet, and then drops her with another clothesline! Toxxin puts Sarita in place and nails a sick flip front face slam for a near fall until Hernandez breaks it up.

Ink, Inc. then interfere, as Shannon Moore take care of Hernandez, and Jesse Neal and Toxxin handle Anarchia in the ring. They hit a nice handspring bulldog double team move on him, before pantsing him for the world to see. Back inside the ring, Rosita steps onto the apron but Toxxin stops her from executing any type of maneuver behind her back. This distraction provides enough time for Sarita to drill Toxxin with the title belt though, as she then covers and retains the titles for her team!

Thoughts: First of all, congratulations to Gail Kim on her title victory! Now, onto the unfortunate stuff… Well, I’m sure a lot will be said about this situation. I’m disappointed that TNA continue to provide us with these month long title reigns in which the champion hardly even appears on TV during them. First Winter, then Mickie, then Winter again, and now Velvet. I don’t fault Gail in the situation because it’s what’s written, but I think Velvet really could have used the win here to help build her credibility. We all thought she would be the champion to break this game of hot potato with the belt, but who knows what will happen now? For the sake of the title, please Gail Kim, hold onto it for dear life!

Onto the six person tag, it was really enjoyable overall, but I’ll just focus on the Knockouts parts here. Sarita and Toxxin worked extremely well together. I hope we get to see them face off in a singles match in the near future because everything they did last night was perfect. I wasn’t a fan of the title belt ending, but I can overlook it due to how great all their other moves looked. I hope this leads to Toxxin helping Ink, Inc. capture the Tag Team Titles, but more-so, I just hope she continues to be given a shot to wrestle on the show because it’d be criminal to not use her talents.