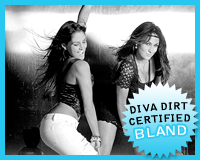 Brie & Nikki Bella‘s Double Vision
Appearance: Nikki’s wearing the top that every Diva seems to own/share, and she wears it quite well, pairing it with some white jeans. Brie has on a black knitted dress with a funky headband that Mischa Barton and girls in Urban Outfitters catalogs wear. I’m not fond of it on them, and I don’t really like it on her. That, along with the peace sign necklace, makes the whole thing look like a contrived hippy outfit, which for the Bellas has become par for the course–that is to say that a lot of their looks seem way too planned out and end up looking like costumes. Take a look back at their past few shoots, you’ll see what I mean. They’re both wearing killer heels, though..
Poses: This is some high contrast, black and white photoshoot that I assume is meant to be grungy, hence the tanks. It’s kind of silly looking, but the Bellas keep it fun, tossing up peace and “rock” signs. It’s when they put on sexy face that hey look like extras in a bad 80s music video. I say lose the props, and let them have fun.
Uniqueness: It’s certainly unique, but not for good reason.
Grade: Bland. It’s strange, but the Bellas don’t seem to have such great chemistry together, at least in this shoot. They just aren’t clicking.
• Click to see the rest of the photoshoot. 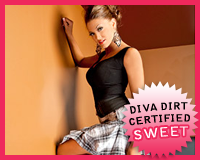 Eve Torres‘s SmackDown Stunner
Appearance: Eve’s top and shoes look great, both in black. It’s when we venture beyond that that things get a little iffy. The skirt, in black and white plaid, looks a little bulky. I’m not against volume, but it looks bunched up and messy. I’m also not fond of the updo–it looks hastily pinned up, like she’s about to do housework instead of pose in a photoshoot. I’d much prefer if it was in a nice bun or something just a little neater..
Poses: The colors in the room are gorgeous–they just make the photoshoot pop, especially since Eve’s wearing neutral colors. She uses her surroundings to her advantage, sitting and standing on the seat. Sure, it looks a bit awkward, but Eve makes it look almost theatrical. I’m kind of mystified, though, at the fact that her face tends to freeze in a few photos.
Uniqueness: The colors mystify me, and I can’t recall too many photoshoots where the surroundings caught my attention this much. Of course, that’s not meant to insult you, Eve.. You look pretty too.
Grade: Sweet. Although the skirt and hair aren’t as fab as can be, Eve still looks pretty sweet to me.
• Click to see the rest of the photoshoot. 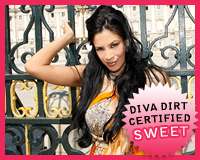 Melina‘s Spanish Rose
Appearance: Melina’s wearign an immense ethnic top in a bright bright shade of orange. It’s pretty, but it kind of clashes with the jeans. Not color-wise, of course, but in style. They just don’t seem to fit together. Maybe if the jeans were in a darker wash, it’d work better. The feathery thing hanging from her neck doesn’t look as fashion-forward as it does like a scalp prop from Inglourious Basterds. I must say though, with the Spanish surroundings, the orange looks great. In one shot, where the top drape forward and hide the jeans, it looks like a gorgeous maxi dress. I kind of wish it was one.
Poses: Melina took full advantage of the overseas tour, posingin lush Spanish surroundings. The foutains and statues look absolutely gorgeous, and she doesn’t look too bad herself. Her facial expressions are reserved and simple, but look pretty sexy, not catatonic. I’m absolutely in love with the gate she poses in front of–so pretty!
Uniqueness: A photoshoot that looks like it was taken while the Diva was hosting a travle show? Nope, don’t see that every day..
Grade: Sweet. See? All one needs to garner a “Sweet” grade for a photoshoot is fly cross-country and pose in some pretty scenery. Easy as pie, right?
• Click to see the rest of the photoshoot. 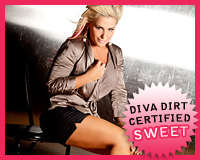 Natalya‘s Calgary Flame
Appearance: A shiny taupe jacket, pairs with black short and heels, look absolutely fabulous on Nattie. This is especially true, considering it seems like ages since we’ve seen her in something not hot pink. It flatters her curves perfectly and looks sexy without being skanky. Frankly, I’m just jonsed to see her out of her tights. I was starting to think they were her second skin.
Poses: I guess Natalya booked to same room the Bellas did, as her backdrop is that same metal wall. I must say that it looks much better in color. A few of the poses see Nattie on a chair, which allows her to show off her stems in a natural way. Her face exudes subtle sexiness and yep, there’s her signature laugh. Love it!
Uniqueness: Nattie not in her tights.. Just let that though permeate a bit.
Grade: Sweet. She looks gorgeous in actual clothing, and her poses are sexier than those of a lot of the more “traditionally sexy” Divas. She’s got so much potential in her.
• Click to see the rest of the photoshoot.

Savannah‘s Love at First Sight
Appearance: It’s Savannah’s photoshoot debut, and she goes all out with a sexy slinky black top, with black shorts and some lace poking out. She keeps the rest of the outfit simple, wearing a single gold cuff. It’s quite pretty, and it shows that she can master simplicity, but we’ll see if she makes a trend out of it, but I think I like her style already..
Poses: Being ECW’s resident interview, she’s go free reign of the backstage area, and she uses it to the fullest, posing at the bar and lounging in chairs. She seems to have found the most colorful surroundings and they make for some engaging photos, especially since she’s wearing all black. She seems smiley and happy, but balances that giddiness with some sexy posing. She’s found a nice level between the two.
Uniqueness: New Diva, first photoshoot! It’s a once-in-a-career type thing.
Grade: Sweet. It’s Savannah’s first shoot, and it’s tough to judge a Diva by a single shoot, but I like what I see so far..
• Click to see the rest of the photoshoot.

NOTE – If any of you come across any new TNA photoshoots during the week, feel free to drop us a tweet and let us know–it’s tougher to keep track of TNA’s new stuff!