We’ve modified our Unwrapped feature a bit. On top of our grading, we’ll give you the chance to give your own grade to each photoshoot, “branding” each like so:

NOTE: I missed last week’s post due to a busy schedule, so I’ve combined the photoshoots from the past two weeks into one mega post. Enjoy! 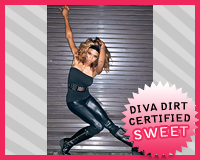 Alicia Fox‘s Heavy Metal
Grade: Sweet. The aesthetic of the steel against the all-black ensemble create a rock-n-roll vibe, and Alicia supports that with her serious and sexy poses. She poses against the door in interesting ways, using her arms and legs to tell the story rather than relying on her face or physique to capture the attention. Her outfit–black leather-like tights, black tube top, black knee-high boots, a black headband, and an eye-catching belt–is simple but extremely sexy. The fact that they’re all in black don’t detract from the look, but rather enhance it. Her figure is on full show, but it doesn’t look at all trashy.
• Click to see the rest of the photoshoot.
[poll id=”469″] 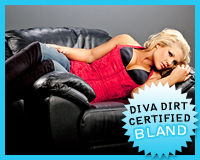 Beth Phoenix‘s Poured In
Grade: Bland. The centerpiece of this shoot is the hot pink corset top, which, in my opinion, is its undoing. The jeans and boots are quite nice, but the corset looks like it’s literally sucking the life out of her–her bra looks ready to explode. She looks uncomfortable, judging by her facial expressions in a few photos and how gingerly she sits and stands. They might say “no pain, no gain”, but in this instance the pain didn’t help Beth gain a damn thing. Breathe Beth, breathe!!
• Click to see the rest of the photoshoot.
[poll id=”470″] 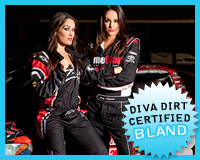 Brie & Nikki Bella‘s Pretty Pit Crew
Grade: Bland. This is another one of those “sexy sports” photoshoots that the Bellas have become accustomed to, but this time it’s NASCAR-themed. The girls look nice, but the racing jumpsuits aren’t very sexy, even if you wear heels with them–which, actually, kind of makes them look kind of ridiculous. Try as they might, the Bellas sort of just look like they’re stand-ins for Danica Patrick in one of those lame GoDaddy.com commercials. But when it comes to GoDaddy.com commercials, I think they’d do a better job than Candice–did you see that latest commercial? Sheesh..
• Click to see the rest of the photoshoot.
[poll id=”474″] 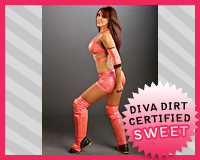 Layla‘s Ring Ready
Grade: Sweet. Of all of Layla’s new line of ring gear, I think I like this one the best. For one, it’s one solid color–no black or white straps that evoke S&M gear. The shade of pink is a gorgeous color, not too brash or girly, and goes great against her complexion. The poses are nice too–she showcases the outfit uniquely while looking poised and focused, just as she should before a match. There’s no need to go super-sexy in a ring gear shoot, as it kind of clashes with the mood of the attire. In that sense, Layla’s got the right idea here.
• Click to see the rest of the photoshoot.
[poll id=”471″] 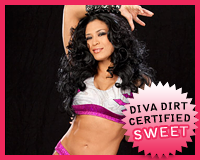 Melina‘s Untamed
Grade: Sweet. As this is a ring attire photoshoot, it’s appropriate that Melina’s evoking that “primal” persona she’s got in the ring–her hair is downright wild. I like it, though, as it’s a different look for her and adds an element of excitement to the shoot. The gear is the pretty silver and purple outfit, which I love, and the cutouts show just enough skin to be risque without making her matches an NC-17 affair. The signature Melina flair is present in her poses, with her arms working overtime. She’s got her game face on too, which fits for this ring gear photoshoot but might be repetitive in other, more conventional shoots.
• Click to see the rest of the photoshoot.
[poll id=”472″] 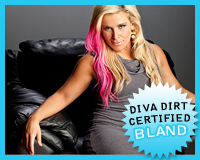 Natalya‘s Sitting Pretty
Grade: Bland. The gray dress might be pretty, but I wouldn’t know by the way Natalya’s seated in that chair for the entire photoshoot. It’s just not a flattering pose, and limits the shoot’s potential. Sure, she looks sexy just sitting there, but at times it just results in lousy posture and a few unintentional upskirts. Yikes.. I’ll give her credit–her facial expressions, with their diversity, help the photoshoot considerably, but they can’t carry it all on their own. The rest just doesn’t pull its own weight, and the whole shoot suffers as a result. That chair does look comfy, though..
• Click to see the rest of the photoshoot.
[poll id=”473″] 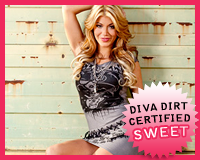 Rosa Mendes‘s True Grit
Grade: Sweet. The stitched-up dress overed in quotes and the star necklace give me too much of an Avril Lavigne vibe, but I’m able to look past that thanks to the fabulous boots, good poses, and interesting backdrop. It looks like an old, rusted-out shed, but the colors look awesome, and compliment the punky vibe Rosa’s going for. It just goes to show how a seemingly ordinary setting can look extraordinary under the right circumstances (and lighting). The same goes for her outfit–in a regular studio shoot, it would probably get a “bland” grade from me, but in this “gritty” setting it looks a heck of a lot more interesting.
• Click to see the rest of the photoshoot.
[poll id=”476″] 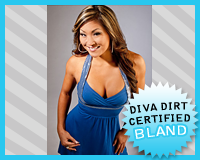 Savannah‘s Blue Christmas
Grade: Bland. This is what a typcial Savannah photoshoot has become–pretty, but not all that interesting. The dress looks gorgeous, and her smile is infectious, but her poses are dull. She needs to lose the catalog-worthy poses and mix it up a bit–create some excitement. After all, she’s not selling us clothes–she’s selling us her persona as a Diva. As is I’m kind of expecting to see a price listing and a “dry clean only” disclaimer in the corner of each picture.
• Click to see the rest of the photoshoot.
[poll id=”475″] 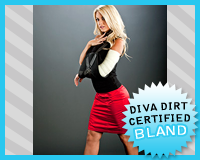 Tiffany‘s Sling Shots
Grade: Bland. Tiffany’s back with a one-winged photoshoot, her left arm in a cast and sling. Hey, at least the sling blends in with her sexy-but-professional-looking black turtleneck. The skirt is a pretty shade of red, and the heels are gorgeous too. This looks would work well in a regular photoshoot, but her sling hinders her posing and makes the photoshoot look more like a joke than anything else. It’s just though to take a girl seriously when she’s trying to look sexy with one arm wrapped up. I’ll give Tiffany credit, though–she’s trying her damnedest. It’s more effort than we see out of a lot of Divas with two functioning arms.
• Click to see the rest of the photoshoot.
[poll id=”477″] 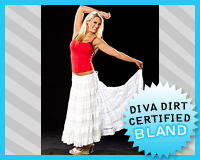 Tiffany‘s White Stripes
Grade: Bland. I have a feeling this shoot was aiming for a casual aesthetic, with the simple tank top and flow-y skirt, but it’s not the best look. The skirt is a little odd with its strips of transparent material, and the random shoe-less poses kind of mess with the flow–I would have preferred her to just ditch the wedges all together and keep a consistent, ultra laid-back mood. I don’t fault a Diva for wearing a full-length skirt–it’s different to see them not showing off every inch of their legs–but this one just doesn’t work as well as it could. Points for originality, though.
• Click to see the rest of the photoshoot.
[poll id=”478″]