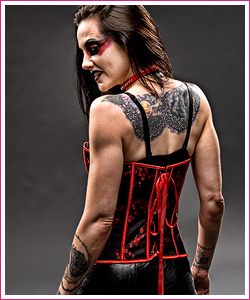 We reported a few days ago on a rumor that Daffney broke her arm at Bound for Glory following an extreme bump through a barbed wire board during the Mick Foley/Abyss match.

However, according to PWInsider, she actually suffered a concussion. She was held at the hospital overnight for observation and thus did not appear at this week’s Impact tapings. Putting that all in perspective, it looks like her time on the injured list will be shorter than previously thought. Still, a concussion is a serious matter, so don’t expect to see her jump right back into action all that soon.

If you feel so inclined, drop Daffney a “get well soon” message on Twitter. We hope things are right as rain for her ASAP!

EDIT: The Wrestling Observer website mentions that Daffney suffered both a broken arm and a concussion. Hopefully this will be clarified soon.