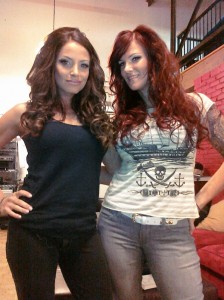 Fans may remember a couple of years ago that WWE legends and former rivals, Trish Stratus and Amy ‘Lita‘ Dumas, announced they’d be teaming up again to make a movie. Things have been quiet on that front for a little while — until now!

Speaking to Diva Dirt earlier this week, Trish gave us a status update on the movie following Dumas’ recent visit to Toronto.

Trish said: “We had gotten together about doing a remake of a movie called ‘Doctor Doom Versus the Wrestling Women’, and it’s [one of those] old school lucha [wrestling] films that are very campy.”

“We’ve been chatting about that and we’ve had some interest for us to pursue that.”

As for the delay in momentum? Well, if you hadn’t noticed, Trish has been kinda busy building her empire! “We get so busy. We got on board and we were talking about it, and then I just had everything for me [her projects] launched on my end. Then I was finally like, ‘Okay, let’s get back to this’, because I had just finished [Bounty Hunters], and my product line was launched so that was good. We started talking about it again and it’s definitely a project we’re interested in doing.”

“Plus, she has a place in Nicaragua and I went to visit her, so it’s a pretty good place to have production meetings. [Laughs]”

Trish and Amy did a photoshoot inspired by the original movie back in 2010. Some behind the scenes pictures can be found here.

Listen to the full interview with Trish by catching a replay of Diva Dirt Live here.

Trish’s debut movie, Bounty Hunters, is available on DVD now in the UK and due for release on February 28th in the US and Canada.

Visit www.trishstratus.com for more on Trish and to pick up her yoga products.