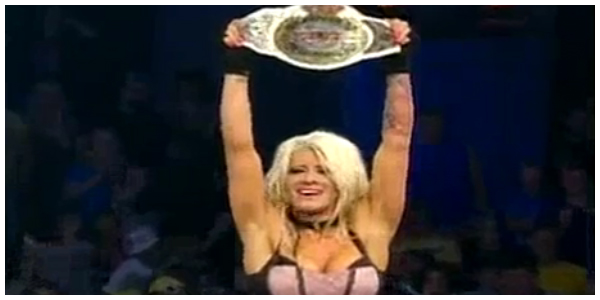 For the second month in a row, there was a major swerve during the Knockouts Championship match on pay per view. Angelina Love became the first ever four-time Knockouts Champion tonight at Victory Road, defeating Madison Rayne by disqualification due to ‘interference by The Beautiful People’.

The stipulations of the ‘Title vs Career’ match meant that Rayne would lose the belt if her tag partners, Lacey Von Erich or Velvet Sky interfered.

The finish came when a mystery figure rode out to ringside on a motorcycle, wearing all black and a helmet, and interfered on Rayne’s behalf, shoving Love into the ring post. The referee, assuming it was either Von Erich or Sky, called for the bell and awarded the championship to Love.

The move marks the third consecutive title switch without the champion even being pinned. Tara lost the belt in April in the Lock Box Showdown and Rayne later pinned Tara for the belt in a tag contest at LockDown though Angelina was champion.

Let speculation begin as to just who the mystery Knockout is. My money’s on Tara.