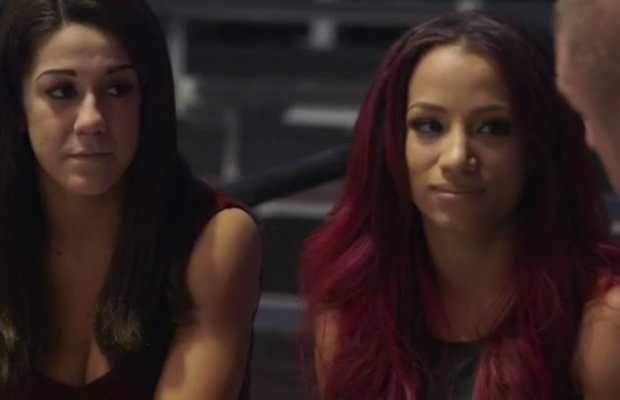 This week’s episode of WWE Breaking Ground followed Carmella on her journey back from an injury scare, checked in on Aliyah‘s progress in her character development and took us behind the scenes for the biggest moment in Bayley‘s career thus far.

The episode started where last episode left off, with Carmella being tended to after a kick from Eva Marie knocked her silly at an NXT live event. Afterwards, she had a one-on-one talk with NXT Head Trainer Matt Bloom, who encouraged her to look out for her health in the ring. The episode followed her on her quest to be cleared to wrestle in the ring again at a live event, where she teamed with Asuka and Athena.

A less triumphant story came from Aliyah’s attempt to flesh out her character. She received encouragement from William Regal when she tested out her entrance for him, but a promo performed for her fellow NXT Divas and Superstars fell completely flat.

We also got a look at how Divas perfect their makeup for HD cameras, sitting in on one of their makeup classes.

At the end of the episode, Bayley and Sasha Banks got the surprise of their lives when Triple H sits them down to tell them they’ve been booked in the main event of NXT TakeOver: RESPECT. The episode ends on a cliffhanger, though, holding off the big reveal until next week.

Watch preview clips below and view the full episode on the WWE Network.