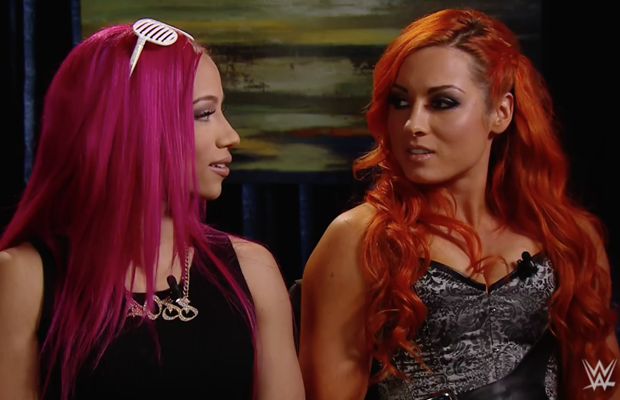 This week’s WWE.com sit down interview with Michael Cole featured Becky Lynch and Sasha Banks, the two women vying for a shot at Charlotte‘s Divas Title at WrestleMania 32.

At the start of the interview Sasha admits that a year ago, she believed she’d be in the position she’s in today. She says she’s always dreamed of competing at WrestleMania, and she is confident that she will be doing that this year. Becky shares the same sentiments, having dreamed of doing it and being confident that she’ll be the one to wrestle for the Divas Title.

When asked if she had already squandered her chance at the Divas Title by losing at Fastlane, Becky reminds Cole that Ric Flair‘s interference cost her that match. She calls out Sasha for her post-match attack, calling it a “cheap shot.”

Sasha says her attack wasn’t a cheap shot – it was a statement. She says she’s had to sit back and watch every other Diva get an opportunity at the title except for her. She promises that, if she does get the opportunity to face Charlotte at WrestleMania, she’ll beat her. She says she was born to be the best, and is better than Charlotte, Becky and even Ric.

Becky says Sasha is “dynamite”, but reminds her that dynamite is useless unless you have fire to light it. Sasha dismisses this as a “cute quote.”

Sasha says she was surprised by the double pin in her match against Becky on Raw, because she never loses. However, she is adamant that it wasn’t a loss, but a draw. She says Becky is lucky that the match wasn’t extended.

When asked about their rematch on SmackDown and why they think the deserve to go on to Mania, Becky says she’s earned this moment and will take the title. Sasha says she is the best Diva the WWE has ever seen and deserves a shot at the title. She promises to beat Becky on SmackDown and go on to defeat Charlotte at WrestleMania.