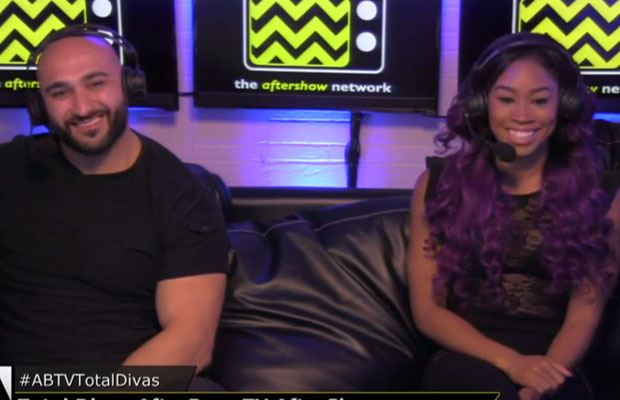 Last night, Cameron and boyfriend Vinnie were guests on Afterbuzz TV’s Total Divas after show, discussing the latest episode and her current status with the WWE.

While she has not appeared on WWE television for the last couple months, Cameron revealed that she has actually been doing some in-ring training outside of the WWE:

“I’m doing my own training, like what I’m not supposed to be doing. I want to be the best that I can possibly be and if it means like being a rebel, and if I get in trouble for it, at least I can say I got in trouble because I want to be better.”

Cameron also admitted her frustration in being left out of the Diva Revolution storyline alongside her fellow Divas Emma and Natalya, referring to the trio as “The Forgotten Ones”.

Despite not being included in the storyline, Cameron feels there is a spot for her on Team B.A.D., discussing how fans had been begging her to stand alongside her former Funkadactyl partner, Naomi:

“People have been like, I wish it would’ve been you instead of Tamina… To see you, Sasha and Trin, that would have been some sassiness.”

Cameron was also asked about an altercation she had with Paige on a recent episode of Total Divas. After dishing that the segment wasn’t scripted, Cameron shared her thoughts on the former Divas Champion:

“I just feel like she’s had so many opportunities given to her, like sometimes people start to feel themselves a little bit. Maybe she feels like, ‘I am bomb so I can act this way.'”

Watch the full episode below: