Video: Charlotte, Natalya and Tamina Talk About the Pressures of Being Multi-Generation Divas on ‘Table for 3’ 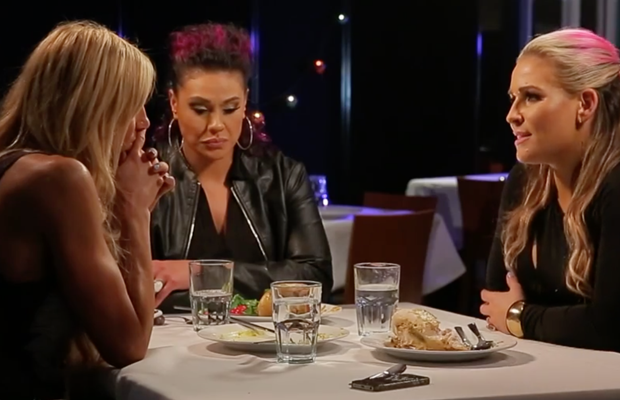 The latest episode of Table for 3 brought together Charlotte, Natalya and Tamina Snuka for a conversation about the pressures of living up to their famous relatives and blazing a path for themselves in the WWE.

The Divas started off the conversation by sympathizing with each other for not being comfortable with traditional Diva roles. Natalya credits Charlotte with using the things she felt inadequate about in herself.

Natalya recalls her tenacity in getting hired by the WWE, admitting that she would have worked for them for free. She says, in developmental, everyone respected her for her background, and most of the pressure she felt she put on herself.

Charlotte says she is tired of being criticized for looking like her father, which is something she can’t control. She says it’s a “damned if you do, damned if you don’t” situation, because she’d get heat for ignoring her heritage. She says it’s a constant struggle for her to stay true to who she is and please everyone. She says, when she first got to developmental, she was jealous of those who had a “blank slate” and didn’t have to live in the shadow of a famous father.

Natalya recalls people telling her to stay away from the Hart family moves and imagery and blaze her own trail, but she instead decided to embrace it. Charlotte relates to that, saying she didn’t even bust out a “WOOO!” until she wrestled Natalya at TakeOver last year. Tamina remembers someone telling her she couldn’t do the Superfly Splash because women weren’t typically doing top rope moves, but she didn’t buy into that.

Charlotte and Tamina recall that the last time a Flair and a Snuka wrestled was at Royal Rumble 1992, marveling at how their family legacies are being continued by women.

Tamina says felt pressure being the first Polynesian woman to make it to the WWE. She admits that she initially had no interest in wrestling, but discovered her passion for it later on. When she was a child, her father pushed to succeed in everything, including school sports. She says The Rock played a big role in pushing her to wrestle. Conversely, Natalya recalls her father being upset at her wrestling, but he has become her biggest cheerleader.

Charlotte recalls struggling with her height as a child and likens it to getting hate on social media. She and Tamina joke about the double-edged sword of being told they look just like their fathers.

Charlotte says she didn’t really consider a career in wrestling when she was younger, as she saw the Divas as beautiful women who were in Playboy. She didn’t know anything about wrestling and was more focused on sports. She says she didn’t even know how to put on makeup. She sees the turning point in her stance on wrestling as taking place during WrestleMania 28 weekend, when the Four Horsemen were inducted into the WWE Hall of Fame. She was at a crossroads, having just graduated college and was stuck in a bad marriage. She went to dinner with her family and was convinced by her brother Reid Flair to try it. She ended up in Tampa three months later.

Watch a preview clip below and view the full episode now on the WWE Network.