What Will It Be for TLC?

We may have just put one pay per view behind us but the trail rolls on, because in just three weeks we get WWE’s next pay per view: Tables, Ladders & Chairs. Now before y’all get excited about a Divas stipulation match, may I remind you about the Hell in a Cell pay per view? Like that, it’s likely that only the main events will be contested in those matches.

With three weeks to go, we have two clear feuds on Raw & SmackDown. The Divas Championship race narrowed last night when Maryse made her return and targeted Melina, while there’s been ongoing animosity between Michelle McCool and Mickie James which could lead to a Women’s Title match. Which brand should get the match? Your Raw & SmackDown Redux writers argue for their show: 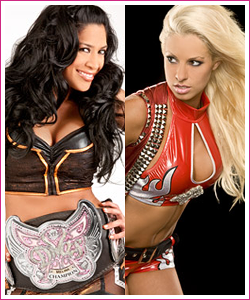 Raw (Argument by Erin)
Maryse’s return brings a feeling of immediacy to this pay-per-view opportunity. Whatever heat she has built up from her return (even though I doubt returning while wearing a turkey costume builds much heat) will evaporate soon, and the WWE needs to capitalize on this (relatively) fresh feud ASAP. To pass up this opportunity for a big-scale Divas Championship match would be a mistake; They already blew a similar shot with Alicia and Melina by rushing to have the match before Survivor Series. Though Melina and Maryse won’t have enough time for a proper and full build-up, this match could serve as a formal kick-start to their feud. And, to be honest, I’d much rather see this light the fire under the feud than a bloody Gobbledy Gooker attack. Whether or not a Divas Championship match at TLC would result in a Maryse win, I feel that a worthy feud could be built off of it–Maryse could flaunt her quick win in Melina’s face and start a babyface title chase, or Melina could simply frustrate the arrogant Maryse by batting her away in her first title shot. Either way, it could make for an entertaining feud.

The alternative–a Mickie/Michelle match–has been in the works for much longer, but with the high school mentality that feud has had, is it worthy of the “big time” just yet? What kind of feud can be built off of fat jokes and clothes-cutting? I think those two need to build something more legitimate before they have what is destined to be their “blow off” match. Besides, they just had a big PPV match in the form of the Survivor Series tag team match; I mean, it was literally branded “Mickie vs. Michelle”, wasn’t it? Does SmackDown deserve another PPV match so soon? I think if they were to have another PPV match this soon after the “Team Mickie vs. Team Michelle” match, it might put the brakes on the feud altogether (PPV matches signal the end of feuds, quite often), and they need more room to grow before they reach that endpoint and shift to something else. It would be a case of “too much too soon” in my book. I think it’s time that Raw get the spotlight. 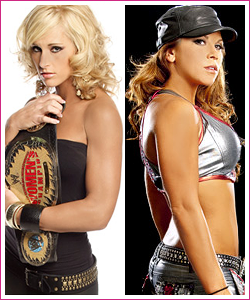 SmackDown (Argument by Melanie)
I guess Survivor Series was a SmackDown-led match, but in the end it still involved Divas from both brands and that isn’t really a ‘SmackDown match’. The feud between Mickie & Michelle has been brewing for a short while now, longer than Maryse & Melina, so it’s probably easier to give the opportunity to the blue brand Divas who have more depth going into the pay per view. The storyline, granted, may not be the best so far with Mickie being reduced to tears — but they have had more time and effort put into their storyline than the Raw feud likely will and it seems the gradual build up to a pay per view match is perfect timing with the TLC PPV. It’s not too early for a title match and it’s not too late either, which is the danger for most of these Diva bouts. The timing is just right for these two to go at it, and if we think about it timing is key — this is a fresh matchup that we haven’t seen before. We’ve already seen Melina vs Maryse once before this year, while Mickie vs Michelle in a singles match is still fresh for the fans.

With Mickie’s team gaining a win over Team Michelle, it makes the perfect catalyst to give Mickie a title shot [as she was team captain for the winning team] and use the next few weeks to build towards the match, announcing it this week on SmackDown. After the way she’s been treated lately, we could see Mickie begin fighting back and slowly but surely standing up to Michelle before their match at TLC. Unfortunately, I don’t think it’s the right time for Mickie to win the title so you could have her gain the upper hand, only to lose at the event. In comparison on Raw, it seems like they’ll just rush into a title switch for the management favourite [Maryse] without really considering where to go beyond that. That match needs to be held off till at least January to mean anything. Mickie & Michelle have made more progress and could easily make enough more in the coming weeks to warrant a PPV slot.

Which argument do you agree with and which match would you rather see? Vote below: