What Will She Do Now? 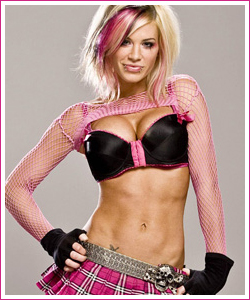 Last week, former Diva, Ashley Massaro had us shaking in our boots when she hinted at a possible WWE comeback. The self proclaimed ‘Dirty Ho Diva’ cited that she had a meeting with John Laurinaitius, Vice President of Talent Relations. Well that’s Ashley side of the story…

Now it is being reported that (Tr)Ashley did indeed have a meeting with Johnny ‘Perv’ Ace, but how do I put this delicately… Bitch has no chance in hell of getting her old job back! Ashley left the WWE last year, following the Ashleygate escort debacle. At the time she said she was leaving to take care of her sick daughter.

It’s not even been a year since Ashley left the WWE and already she wants back in? I’d hate (read: love) to speculate but I’m guessing Ash has fallen on hard times in the current economic climate, because the whole thing reeks of desperation.

Meanwhile, the controversial Diva continues to cause drama. Her latest escapade includes calling a 13 year old girl a ‘trick’ and ‘f–king c–t’. I wonder how that would get over with WWE’s new PG rating?

EDIT: Said 13 year old girl has posted a video blog reply to Ashley via MySpace, click here to check it out.