Will Trish Mentor Melina to WrestleMania? 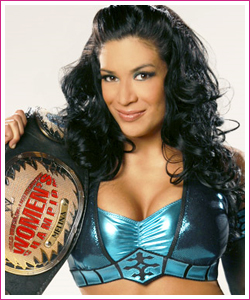 Current Women’s Champion, Melina took part in a live chat with Comcast on Wednesday and dropped a line about legend, Trish Stratus. Though it is but an interview, could it perhaps be an indicator to the direction WWE is going in for WrestleMania 25? Read below:

It’s awesome, and also there’s a lot of pressure… what is the Spider Man line? “There’s great power, but there’s great responsibility.” I feel like there’s a lot of people that are backing me up and I don’t want to let them down, but at the same time I’m coming back from an injury — my ankle is still hurting — and I’m always having this fear … that I could slip up and lose the championship… there’s a lot of people helping me train, like Trish Stratus is helping me, and she’s putting her name on me, so I don’t want to let anyone down. I’m putting my belt on this Monday Â against Beth Phoenix…

The line about Trish definitely came out of left-field, so I can’t help but think it may be the implantation of a seed for ‘Mania. There have been various rumours floating around about Trish’s participation at ‘Mania 25, almost too many to dismiss them as just gossip. There were no rumours about Trish heading into WrestleMania 23 or 24.

I definitely think that the focus should be on today’s talent, though for nostalgic purposes and just to add that ‘Mania feeling, I’m not opposed to Trish coming back for a programme heading into the biggest pay per view of the year. From the sounds of it, Trish could mentor Melina to a Women’s Championship match against Beth Phoenix. I don’t see that as a bad idea whatsoever, it keeps her involved but not in a match taking away the spotlight from the current performers – in the same vain as Ric Flair’s rumoured involvement at ‘Mania.

With Rosa Mendes in Beth’s corner, WWE could easily bring in Trish as a surprise guest to help Melina out, playing off the fact that Trish got the better of Beth on Raw last December. I’d also use WrestleMania as an opportunity to finally give a Diva the chance to pin Beth ‘cleanly’ i.e. by way of their finishing move, rather than a quick roll-up that screams ‘fluke’. Beth has worked her Glamazon character for nearly a year and a half now, it’s about time she had a ‘clean’ loss; the storyline explanation could be that Melina managed to overcome her with Trish’s mentoring.

Though this is mainly conjecture on my part, we still don’t know the direction for WrestleMania but I’m hoping we get some indication following the Women’s Championship rematch on Raw this Monday.