Who’s Next for the Knockouts Championship? 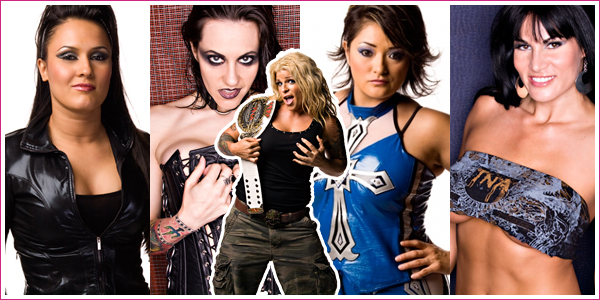 ODB has successfully defended her Knockouts Championship against perhaps the two biggest challengers in the division, Awesome Kong and Tara, who will likely now be feuding on their own. Where does this leave the Knockouts Champ? Who will be the next challenger for the title? With seemingly the top contenders for the title now wrapped up in their own feuds [Saritaylor vs TBP, Kong vs Tara], this leaves the door wide open for a Knockout who is usually the ‘understudy’ to come in and stake their claim against ODB. We weigh the options:

Alissa Flash: Perhaps the most underutilised TNA Knockout on the roster, the Future Legend has been laying down for the pin more often than making the cover. Her history beyond TNA is what Barney Stinson would describe as legen-wait-for-it-dary. She is considered one of the top women’s wrestlers in the world. So why is it that in TNA she has become a doormat for her fellow Knockouts? With her alter-ego Raisha Saeed now seemingly done, there’s no need for TNA’s writers to have to prioritise her two roles — they now have the opportunity to push the Future Legend hard and have her cement what seems like a birth right, to be a top Knockout. As one of the most experienced women on the roster, we have no doubt she could give ODB a good run for her money and their matches would likely be epic.

Daffney: She’s bumped and bumped for this company, why not reward her? It’s time for Dr Stevie’s sidekick to branch out on her own. Behind that character, many forget that Daffney is a fantastic wrestler and has a genuinely unique style in the ring [see her match with Hamada]. As a fully-developed character also, which is rare in women’s wrestling, the storylines are seemingly endless for her antagonising ODB. ODB is a woman of bad ass strength, but I’m guessing Daffney could spook her out with some Dark Knight Joker-esque antics. Just think: Psycho Mickie on crack!

Hamada: Is she a babyface? Is she a heel? TNA can’t quite decide what they want Hamada to be. Right now however, she is a babyface and despite having an awesome debut match — it’s safe to say that TNA has dropped the ball with this Knockout. Why not have her re-establish herself by going for the Knockouts Title? Hamada has a hard hitting style that could make for some rough-and-tumble matches with the Knockouts Champion, who herself is a rough-and-tumble kinda gal.

Traci Brooks: Original Flavour has yet to truly be considered a top Knockout… or even a middling level Knockout for that matter. She was part of the now defunct Main Event Mafia, so they could bring her back with a renewed focus on becoming the top Knockout in the company, touting all the tips and tricks she learned from wrestling ‘royalty’ in the Mafia. Traci is long overdue a title programme, right? Perhaps this could be the time for her to re-establish herself.

So which of our four chosen Knockouts do you think should be next in line for the title? Or do you think it should be someone else entirely? Vote below & sound off in the comments.