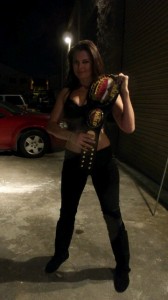 The company tweeted results throughout the evening, saying that the “Luck of the Draw match” was originally to be contested by dancing. Jackson was eager to dance but Winter laid into her and “used her charms” to persuade WILD owner Travis Leland into drawing a new match – which wound up being of the No Holds Barred variety. Tab nearly had the match won until a masked man distracted her long enough for Winter to clobber her with the belt, before pinning her to take home the title.

Shelly Martinez was originally scheduled to be in the title match but had to withdraw due to a booking conflict. It’s also interesting to note that earlier in the year, Winter made an appearance during a WILD match (Tab Jackson vs. Aiden Riley) at an IWL show in Chino, CA, and stated that she wanted Tab to be her first opponent in WILD competition.

Fellow WILD wrestler Terra Calaway, who is the current LuchaPro Women’s Champion, has already proclaimed that she is interested in a champion vs. champion match.

Winter finishes the week with a match against Mickie James for the TNA Knockouts Championship at TNA’s “Hardcore Justice” pay-per-view. She could possibly walk out of the show on Sunday a double-champion.

Below is video of the first time she and Tab Jackson met in a WILD ring.