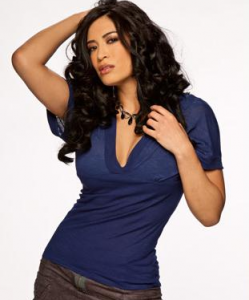 WWE Diva, Melina, recently spoke to SLAM! Sports while on a promotional trip to Canada.

Some highlights from the interview include Melina being asked about rumors rampant on the Internet that she’s not being pushed at the moment because she’s being punished by WWE management for having a bad attitude.

“That’s just the way it goes. Nothing goes smoothly all the time in life, nothing’s always perfect in any career. In this business, everybody’s going to get their shot; I can’t always get mine. And I accept that.”

Melina Blogs About Staying Strong, Being the “Most Controversial Woman in Wrestling” & Online Reports About Her

The former Divas Champion also comments on the amount of TV time the Divas get:

“I trust there’s a reason that we get the time we get. And that there’s going to be a day that we get even more. But until then, we give everything that we can in our allotted time. I think there’s an art to that, and I’m very proud of all the girls on the roster that we’re able to do what we can in that amount of time.”

“People don’t always give the girls the credit that we deserve. I’m not saying that’s within the company, because I know in our company people do know what we have to offer. But I think the ‘smart’ fans sometimes think that we’re being held back because we’re not talented — but we are. I work with these girls every day, and I know what they have to offer.”

“It’s so difficult. We have to look good with our costumes, our hair, and our makeup. And still be PG. But then we have so much more to prove, since because we’re women, it’s like people think we’re not going to be good wrestlers, or they judge us. People don’t realize how much more work we have to do to prove that we can hang, that we’re here, that we deserve to be here.”

On a possible return to managing, she says:

“I miss it. It was a lot of fun. You can be a character behind it, and show little details. There’s so much to be said for doing the little things, like showing a little facials, the way I react to my guy and what he’s doing. I also miss cheating, doing stuff behind the ref’s back. I like being a heel. Being a heel is fun, because there’s so much fun you can have with the character. I get to act crazy, and basically be my alter-ego. When people are rude and mean to me, the person that I really am, I just say, ‘Okay, let it go, and keep moving on with my day.’ As a heel, I can take all those moments where I thought, ‘I wish I could have said this to that person, or done that to this person’ and put it into that character and act it out in the ring.”

You can read the full article, which is a really good read, here.

Thoughts: It’s always amusing to me when people assume a Diva is being punished because she isn’t in the top storyline or on Raw every week — and I would argue this happens to Melina more so than any other Diva. It’s just the way the cookie crumbles. In reality, there’s only one Divas storyline at a time in WWE which means only the girls involved in that storyline are in the spotlight. No one else, sadly, really gets a look in. Beth has been floating around in the background since her return last November, doing very little — like Melina — but you don’t hear ‘punishment’ when it comes to her.

As for Melina’s comments about the Divas not getting the credit they deserve, I’ve said it before — what you see on TV just scratches the surface. The girls aren’t given the time they need to have long matches as they do on live events and usually, when fans go to live events, they’re surprised by how good the matches are. Additionally, few Divas are even given the chance to show personality or have a character that extends beyond ‘generic babyface’ and ‘generic heel’. Alicia Fox has one of the most bubbly personalities of any wrestler on the entire roster (see here) and this is held back on TV. You’re not getting the full enchilada from these girls on television, and I can see why Melina and the other Divas may feel they don’t get the credit they deserve.