Women of the Year 2014: Brie and Nikki Bella 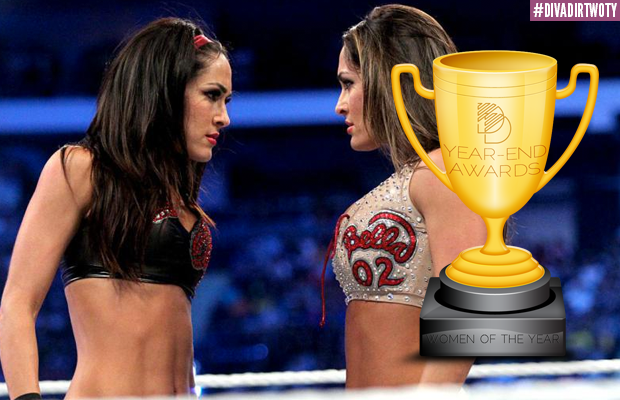 To be honest, if this award was a solo award, Brie and Nikki Bella would be great candidates to take it all the way to the bank. They’ve been in the business for awhile now, but 2014 will definitely go down as their year. From Total Divas, to hot storylines, to title matches, and a championship run for Nikki, the girls were involved in a little bit of everything.

Brie came into her own this year as a top diva, full of personality, charisma, and attitude. Her improvement in the ring speaks for itself and in this writer’s humble opinion, she was involved in the storyline/feud of the year with the one and only Stephanie McMahon. Brie versus Stephanie was a cat and mouse game between the rising star and the Queen of the Authority. Every single segment the two starred in got tremendous reactions and much to our delight, culminated in a match at SummerSlam.

Little did we know what was going to happen on that fateful night in August. (Or did we…)

Nikki decided to make her presence felt by turning on her sister and giving Stephanie the win, and thus our beloved Bellas were no more. The two started going back and forth with one another, with Nikki playing the scorned sister who came off as jealous of Brie. Nikki was elevated and spotlighted in segments, given mic, and got to drop the line of the year, “I wish you had died in the womb!”

Of course, the feud didn’t last long. After Brie lost a match to Nikki, she was forced into the role of Nikki’s servant which ultimately led to Nikki taking the Diva’s Championship from AJ Lee. The twins are seemingly together once again, proving that blood is thicker than water.

But something tells me that Brie isn’t going to forget the humiliation she suffered thanks to Nikki, and at the end of the day, she knows that the championship will look just as good around her waist. 2015 could prove to be even more special for the sisters, especially if it involves a one on one match at WrestleMania for that title!