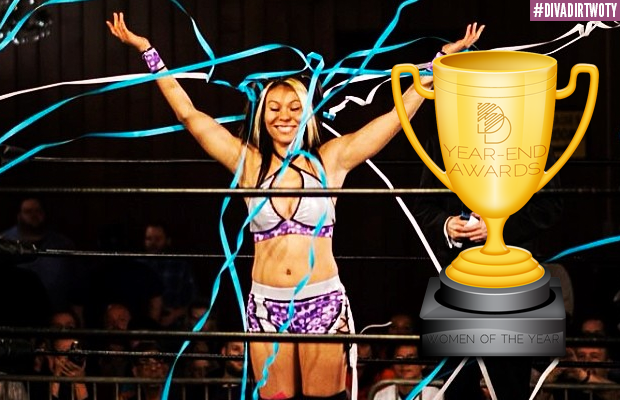 Mia Yim is knocking on the door of superstardom; it’s only a matter of time before she ends up kicking it down.

Hers is a name that’s constantly being spoken in connection to WWE and TNA, indy wrestling fans eagerly awaiting the day that one of the two snaps her up and brings her to the mainstream. That day hasn’t come yet, but after the year she’s had, that moment must be just around the corner.

Looking back, it feels like Mia’s been everywhere this year: WSU, SHIMMER, NCW Femmes Fatales, Valkyrie, EVOLVE, Queens of Combat, TNA. No matter where you turn, there she is.

Mia kicked off 2014 by making some history, becoming one half of the inaugural SHINE Tag Team Champions alongside her Lucha Sister, Leva Bates (the woman known in some circles as Blue Pants). The two won the belts in a tournament at SHINE 17, defeating Allysin Kay and Taylor Made in the finals.

They would lose the belts to Brandi Wine and Malia Hosaka in June at SHINE 20, but Mia and Leva would have enough success in the singles wrestling department to sustain them both through the rest of the year.

In fact, Mia would conquer SHINE itself, shocking practically everyone when she defeated SHINE Champion Ivelisse in Beijing, taking the title for her own. At SHINE 23, she successfully defended it against Nevaeh, ensuring that the belt would accompany her into 2015.

TNA would come calling, too: she competed at this year’s Knockouts Knockdown Pay-Per-View, wrestling Brittany in what many have deemed the match of the night. She took advantage of the high profile opportunity, absolutely delivering in her match and showing TNA officials (and anyone else who might be watching) just what they’re missing out on.

Time will tell if Mia’s destined for the mainstream, but even if WWE and TNA don’t snap her up, fans can rest assured that Mia will take any and every opportunity to steal the show, anytime, anywhere.