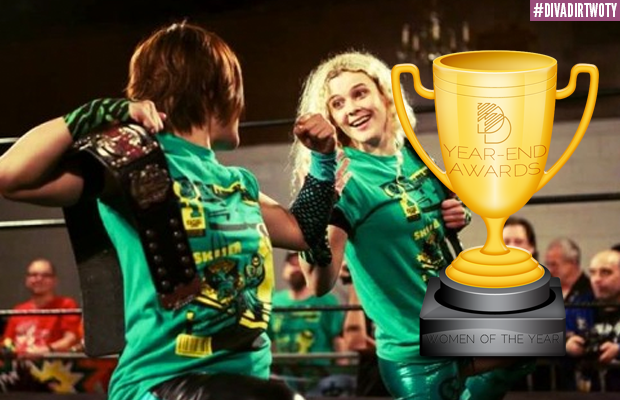 If you’re reading this from Japan and have no intention of being in the United States this coming spring, Tomoka Nakagawa wrestled her final match earlier this month. If you will be in the US and happen to be going to the next batch of SHIMMER tapings, relax – you still have one more chance to see Nakagawa wrestle before she retires, along with her longtime tag partner, Australia’s Kellie Skater.

It’s been a long and incredibly fun journey for the Global Green Gangsters this year. As a team, they’ve been utterly dominant as the SHIMMER Tag Team Champions, defending their belts seven times over the course of the year and becoming the most successful tag team champions in SHIMMER history, racking up their total number of defenses to twelve. They still hold the straps, and with Nakagawa making her final appearances for SHIMMER in the next few months it will be interesting to see who 3G pass the torch onto.

As singles competitors both women have had a rollercoaster year. Kellie Skater has been in Japan for much of 2014, wrestling mostly for Stardom, and unknowingly worked the first several months of the year with a fractured foot, finally taking time off to heal upon finding out. Meanwhile, Nakagawa has been working more-or-less continuously since her retirement announcement, dropping the Oz Academy Tag Team Title she held with Hiroyo Matsumoto in September and spending her final months putting over the talent she leaves behind.

3G will always hold a special place in indy fans’ hearts for their unbridled charisma, high work rate and backhanded but endearing tactics, and it’ll be sad to see such a tight unit go its separate ways. Of course, Kellie Skater still has the world at her feet in wrestling, and I can’t wait to see where it takes her – but we’ll sure miss you, Tomoka.