Women of the Year 2014: Stephanie McMahon 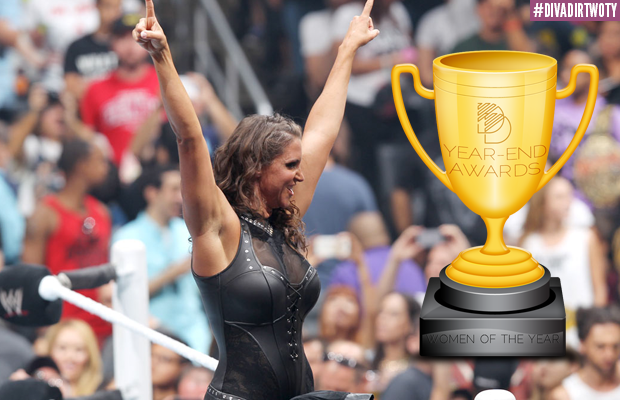 What can we sit here and write about Stephanie that we haven’t already written before? At the risk of sounding like a broken record, the Queen of the WWE is basically everything that is right with the wrestling world. Stephanie McMahon is without a shadow of a doubt the best male or female onscreen performer the company has to offer, and she makes everything seem so effortless. The arrogance and evil she portrays on camera makes her the best heel in the business, and her full time job of wife and mother, along with being a high ranking executive of a billion-dollar company makes her a role model to women across the globe.

This year Stephanie gave us more memorable moments than we can count, and did so in order to give more recognition to the Divas and Superstars she worked with. Thanks to The Authority stable, Stephanie helped Randy Orton become interesting and fresh again, along with reminding us why he works so much better as a bad guy. She helped develop Seth Rollins into one of the biggest stars on the roster, and thanks to that, gave us even more reason to cheer for the likes of Dean Ambrose, Roman Reigns and Dolph Ziggler. Her storyline with Daniel Bryan, even after his injury, is just one of the best storylines in WWE history, period.

Stephanie also rubbed shoulders with the Divas. Once again, tension with AJ Lee was teased, making us want to see them face off in a match more than ever. And of course there was SummerSlam. The Queen did make her return to the ring against Brie Bella, the woman she had tortured for months on end simply because she was married to Daniel. Their segments were Feud of the Year material, involved Nikki Bella, and led to the break-up of the Bella twins at the conclusion of SummerSlam.

Stephanie had some wonderful moments away from the ring as well. Her work with Connor’s Cure, a charity that helps with pediatric brain and spinal cancer research, is well documented. She participated in the Ice Bucket Challenge for ALS. Alongside Triple H, she graced the cover of Muscle and Fitness Magazine, and to follow that up, released her own workout DVD.

Needless to say, Stephanie reappeared on the scene in a big, big way and thanks to Seth Rollins threatening to kill Edge, John Cena was forced to reinstate The Authority on Raw. This sounds horrible, but THANK YOU!!! More Stephanie? Yes, please!