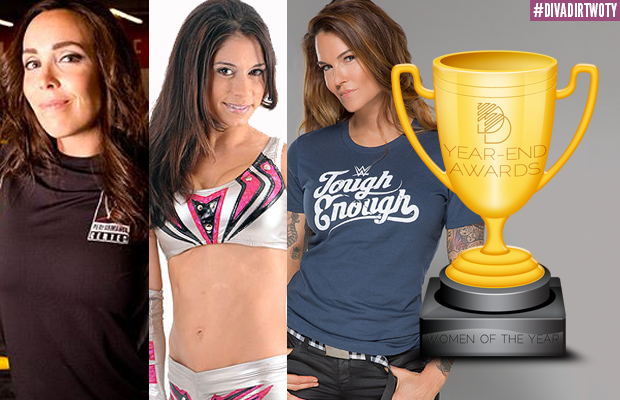 To quote the classic phrase, behind every great man there is a great woman. To put a 2015 WWE spin on that idiom: behind every great developmental Divas division, there are three dedicated trailblazers. Forget your Team B.A.D.s and Team Bellas of the main roster, Lita, Sara Amato and Sarah Stock are the triple threat that have achieved the most success in 2015.

Lita has enjoyed the most successful calendar year, rejoining the ‘E in both on-screen and behind-the-scenes roles. The WWE Hall of Famer was seen as a coach on the revived reality series Tough Enough, a position she balanced with an undisclosed agent/trainer role within WWE’s Performance Center. Lita left a lasting legacy when she retired back in 2007, a career so triumphant that we here at Diva Dirt decided to recognize with our Legacy Award.

To see Lita now sharing her pearls of wisdom with the next generation is truly inspiring. She has been incredibly passionate about advocating the rights of WWE’s female performers, most notably ensuring that Bayley and Sasha Banks‘s Iron Man match was billed appropriately. No specific gender name changes were necessary, and Lita knew that. It was incredibly refreshing to see WWE allow their female employees to have such input with their product, and Lita perfectly demonstrated why that can only be a good thing.

Sara Amato also strengthened her position within WWE’s Floridian training facility, putting the next generation of women’s wrestlers through their paces. She was joined in the latter part of the year by Sarah Stock. The former Sara Del Rey and Dark Angel have created quite the formidable duo down at Full Sail, ensuring that NXT’s female athletes have the right tools to blow everyone’s minds.

If the performances of Bayley and Sasha Banks are to go by, these two have been doing a mighty fine job. Did someone say pay raise?