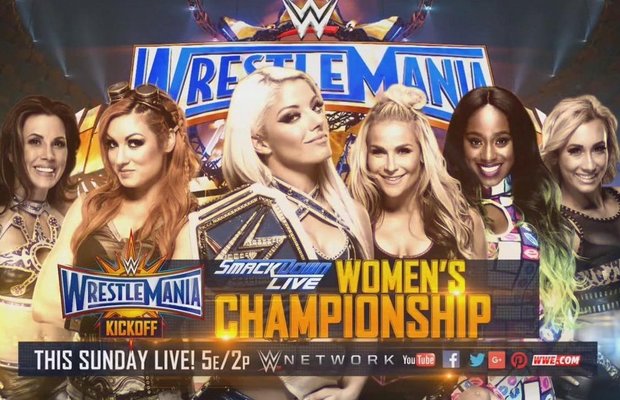 Tonight at WrestleMania 33, every available woman on the SmackDown roster has a chance at Alexa Bliss‘ Women’s Title. Will a new champion be crowned? The Diva Dirt team weighs in:

Abir: The women here all have a connection to each other. Nattie has history with Becky, whom has history with Mickie, whom has history with Alexa whom has history with Naomi, with a few more connections between that. The only other woman with no Singles feud and thus staying pretty quiet is Carmella. After trying and failing to make her name known through feuding with Nikki Bella, Carmella has been aiming to find a way to make her name on SmackDown Live – and thus, Carmellsworth was born. The Princess of Staten Island has shown very little interesting in Chinderella, yet somehow she’s kept him by his side for a while. And if her win on Tuesday is anything to go by, it may be possible that Ellsworth will cheat to help Carmella win her very first title in WWE.

Alex: She’s the hometown girl, she suffered an unfortunate injury, but she’s made a superwoman return… Naomi will be winning that title back and getting her well-deserved WrestleMania moment!

Jack: I am feeling the glow! Naomi, you’ve got this girl. I am ready to be snatched bald!

Josue: Well I’m glad to see this match bumped back to the main show. I think the women of SmackDown are going to work that much harder now and I hope that everyone gets a chance of having their own entrances! But as for who will tonight, I’m going to have to go with Naomi after that electrifying return on SmackDown. She’ll win back the title she never actually lost.

Matthew: Alexa Bliss vs. The World won’t work out for Alexa. Look for Naomi to recapture the title she never lost.

Stephanie: I’m more than ready for the SmackDown 6 to blow us away tonight. If the first 6 pack challenge was any indication, this match will live up to the hype. Alexa will not leave tonight as the champion. I expect Naomi will win back the championship she never officially lost and I can not wait to feel the glow!