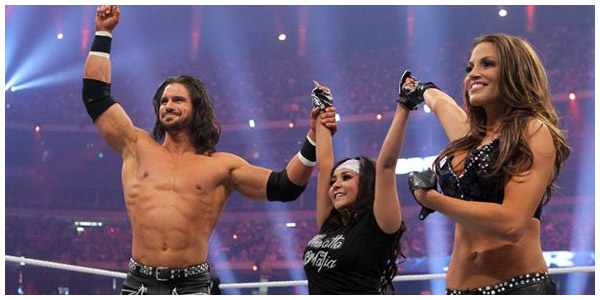 Raise your hand if you expected any other result last night? (Hopefully no one has their hand raised or I might question whether you enjoy Long Island Iced Teas as much as Snooki.) Going into last night’s WrestleMania 27 it was pretty much a given that this was going to be a star vehicle for Snooki. She’d win the match, have a nice little moment and Lay-Cool would run to the back with their tails between their legs.

What we may not have expected, seeing this match on paper, is just how darn entertaining this segment turned out to be! Yes, I’ll be the first to admit it: I was thoroughly entertained by something involving Snooki from Jersey Shore. Does that mean I’m going to run out and buy her book or the entire first season of the show? Hell no. But for what it was, last night’s six-person tag team match was actually enjoyable. I would say that was thanks, in no small part, to a Stratusfying comeback from Trish Stratus and in my opinion, the most consistent Diva in WWE right now, Michelle McCool.

Out first is the team of Lay-Cool, Dolph and Vickie all in matching silver. Nice touch. Layla and Michelle look fabulous! Then comes JoMo and the comeback queen Trish Stratus. Excuse me while I pick my jaw up from the floor. 35 years old, retired for 5 years and she still has such a bangin’ body! Snooki is last out of course to that really effin’ annoying Jersey Shore song. (“Get crazy! Get wild!” Get slapped in the face…) Trish and Snooki have pretty cool ‘Brunette Mafia’ signs emblazoned on their outfits.

As soon as Snooki and Trish hit the ring, Lay-Cool attack! It’s pretty funny to see the towering Michelle McCool have to bend down to take down Snooki, but I digress… The pre-match catfight is quickly broken by the man candy (I sound like Cryssi now!) Dolph holds Snooki back. It’s clear that Snooki is a little flustered by what is going on — you know, not being a wrestler and all — and misses her cue to slap Dolph. She has to be reminded by JoMo to hit her slap and after what seems like the longest five seconds ever, she finally slaps him to a “Are you kidding me?!” freak-out from Ziggles.

Order is restored by the referee as the bell rings… or is it? Not content with fighting their opponents, there’s now in-fighting between Lay-Cool! Both Layla and Michelle want a shot at Trish Stratus (as I’m sure do the men!) but it’s Michelle, being ever the bully, who wins the argument by shoving her supposed BFF aside. Somewhere a ‘Forever Friends’ teddy bear is weeping…

It’s going to be Michelle vs Trish to kick us off. A history-making Diva from the past versus a history-making Diva of present. The two ladies circle each other in the feeling out process before McCool makes the first strike, shoving Stratus. This isn’t the legendary Diva’s first time at the dance though — she begins throwing some Flair-like chops at the first ever Divas Champ, including her patented ‘hand lick’ chop.

Michelle runs at Trish with a clothesline but Trish hits another patented move — the Ma-Trish. Michelle being the studious Diva that she is, scouts the move and kicks Trish in the stomach while she’s in the arch pose.

Michelle wants to end the match already, locking Trish into Faith Breaker position but Stratus isn’t going down! She pulls herself up and begins throwing punches at Michelle, before grabbing her by the hair into a face-smash.

Back and forth between Trish and McCool now. Michelle is up on the top turnbuckle which must signify yet another Stratus trademark — the Stratusphere. But much like the Ma-Trish, Michelle knows what is coming and is well prepared, grabbing hold of Trish’s legs and hoisting her up on the turnbuckle too. This leads to a trade of blows as both Divas tumble to the outside of the ring. Sizable bumps by both ladies as they fall hard to the floor. Trish looks particularly hurt, obviously no longer used to taking big bumps on a regular basis.

Trish shoves McCool into the barricade and then fights off Layla. Layla tends to Michelle but as they regroup, Stratus leaps off the apron with a clothesline on both Divas.

Michelle is back in the ring and as Trish gets up on the apron, she comes running at her with a boot but Trish moves out of the way and it’s poor Layla (ain’t it always?) that eats Michelle’s kick.

Trish with a roll-up but no dice.

Chick Kick! Another pin but this time it’s broken up by Dolph.

JoMo intervenes, clotheslining Dolph out of the ring and then hitting the Starship Pain (still a stupid name) on Dolph on the outside.

Michelle tries to regroup as Trish tags in Snooki now. Snooki is BOOED out of the building when she gets the tag, but that doesn’t deter her one bit as she hits a beautiful handspring into a back-bump on Michelle. Cue gasp! There’s a huge reaction from the crowd who just moments ago booed her.

Snooki follows up with a handspring into a splash on Michelle for the victory.

Hands up if you thought Snooki was going to fail miserably? I’m sure many people wanted her to fail miserably, but she didn’t. As has been pointed out by a lot of people, yes, she was a cheerleader and has gymnastic training but 90% of the people who watch WWE probably didn’t know that. I didn’t know that. So to see her actually pull off that great handspring back bump was a surprise to me and a pleasant one at that. She was pretty entertaining.

As for Trish and Michelle, I’ve said it before and I’ll say it again: They have great chemistry. I want to… nay, I demand we see them go one-on-one! That would be a huge dream match. The teasers we’ve gotten thus far have whet my appetite, for sure.

It was a surprise to me that Dolph and JoMo were pretty much an afterthought in this match — it was all about the Divas. What a strange, bizarre feeling, right? It’s usually the Divas playing second fiddle to the guys. I would’ve liked to see the guys get a little more time as it was their match and their moment too, but I’m not too fussed!

Compared to the past few years, I was much more satisfied — or should I say Stratusfied? — with my Diva fix at ‘Mania. Even though Snooki may not be a wrestler, I thought this match was the perfect combination of entertainment and wrestling, which is what WrestleMania is all about. I’d much rather see this than a 10-Diva tag match which lasts two minutes or a 25 Diva battle royal which lasts two minutes.

Regarding the other Divas not getting on the card, perhaps an unpopular opinion but I’m all for it. There was a time when only 2-4 Divas get on the card each year and it was usually the Divas who had worked hard and had been in a long feud getting a WrestleMania pay-off. In recent years, that’s been watered down with every single Diva getting a spot and creating unmemorable moments. Like them or not, Lay-Cool do work hard and do everything that’s asked of them. They’ve been the most consistently used Divas over the past year and have earned their spot at ‘Mania.

Overall, I thought this year’s ‘Mania match was memorable and entertaining. And with Cole vs King on the card, there was no way this could be the worst match on the show!

Also at ‘Mania, we got to see a couple of the other Divas used in backstage skits. Surprisingly, the other two Divas who I thought should be on the show based on their hard work over the past several months — Kelly Kelly and Natalya — didn’t make the cut. Instead (and understandably) Divas Champ, Eve, made the show, as did the Bella Twins and Beth Phoenix.

In the ‘groan’ portion of the show, we have Snoop Dogg ‘auditioning’ the wrestlers for his next tour. This is supposed to be funny…

Beth Phoenix duets with Khali on ‘Summer Lovin’ from Grease, while the Bella Twins have the thankless job of having to dance behind Hornswoggle like video vixens. I feel bad for all the ladies, particularly the twins. At least they looked hot!

While she didn’t get a match, Eve Torres got the next best thing — a segment with The Rock. How many Divas can boast that?

Personally I found this segment hilarious. The Rock’s wit is unparalleled. The ‘Divasaurus’ and Adam & Eve jokes had me rolling. Nice piece of history for Eve to be part of.